Edit
watch 01:58
Hero Spotlight: Zombieman
Do you like this video?
Play Sound

This article is about the character. For the chapter, see Chapter 104.

Zombieman (ゾンビマン, Zonbiman) is the S-Class Rank 8 professional hero of the Hero Association. He is a product of the House of Evolution.[2]

He is one of the few people aware of Saitama's power and is currently aiming to become just as powerful as him.

Zombieman has scruffy short black hair, red eyes, and pale skin. He wears a worn-out open gray trench coat over his black singlet, with tan stitched pants and a thick brown belt. He has belts wrapped around his body under his coat and wears tanker boots.[4] He sometimes smokes a cigarette. Before his battle with Homeless Emperor, Zombieman had a Y-shaped scar on his chest that he couldn't heal, indicative of an autopsy.[5] 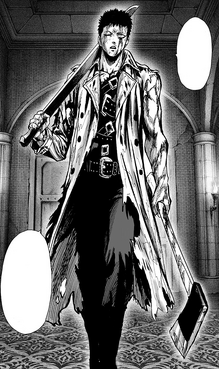 Zombieman appears to be bothered by the peculiarities of the Hero Association meeting, noting that the heroes do not look very cooperative and hiding his annoyance at Pig God's continued eating. He is unusually sensitive to the death of a human. Zombieman is stated to be nihilistic, possibly due to the fact that he has "died" several times, therefore he is always calm. In addition, he prefers to work as a lone wolf and dislikes gathering, although he still respects common courtesy. It is possible that his bleak view of the world and his nihilistic behavior comes from all the years of experimentation in the House of Evolution and his immortality. Moreover, he rarely talks about his past.[3] Despite his bleak view of the world, he is a fairly forgiving individual who does not hold onto a grudge when there isn't a point in pursuing it, and he has a soft spot for children as shown by his camaraderie with Child Emperor. However, he appears to have a sadistic side, since he enjoys killings that create rivers of blood.[3] He is also shown to be a rather smart individual, with detective-like thinking, and knows when he cannot win a fight, such as when he fought against Homeless Emperor.

In comparison to the other S-Class heroes, Zombieman is more thoughtful and respectful, as he acknowledged that there are other amazing mediators in the S-Class other than him and did not mind Sweet Mask's comments of him, simply smoking his cigarette; unphased. He understands empathy as he was proud that Child Emperor made an effort to acknowledge improving his judgement of others and making an effort to understand others, ultimately calming down and reassuring the child genius. When Homeless Emperor shot his beams, he immediately pushed Child Emperor out of the way and took the explosions on his own.

He is fully aware of his limitations, and outright states that he is far more suited to stealth and infiltration, but is more than willing to engage in head-on combat if the situation arises.

After witnessing Saitama defeat Garou, it is revealed that he wants to become stronger and begs Dr. Genus to help break his limiter and become as strong as Saitama, hinting at a possible inferiority complex which stems from his over-reliance on his regenerative abilities and his rather weak physical abilities in comparison to other S-class heroes.

As an S-Class hero, it can be assumed that Zombieman is very powerful. It is said that the flowers of blood and slaughter blossom wherever he goes. However, in terms of destructive power and physical capabilities, he is rumored to be one of the weakest S-Class heroes. By his own admission, fighting is not his forte.[6]

Regeneration: Described as "a man that even in death cannot die,"[7] Zombieman possesses one of the best regeneration capabilities in the series. He is able to regenerate any part of his body no matter how severe the injury is, and he was able to fully regenerate from having a hole in his head, as well as broken arms, in a few seconds.[8] Even if he is beheaded or his organs explode, Zombieman will not die but instead will even regenerate from such fatal injuries.[3] He needs only a few minutes to recover from an extremely mutilated state and regrow his left arm.[9] His regeneration is so fast that one of Pureblood's bats was unable to escape his flesh before Zombieman fully healed.[10] Even after having parts of his body incinerated by Homeless Emperor's energy spheres, Zombieman was still capable of fully regenerating several times, albeit it may take him quite a bit of time to recover,[11] and there was even a time he himself thought he was dead.[12] However, this regeneration does not give Zombieman full immortality, as he will die if he is reduced to mincemeat.[13] The Virtual Genocide System's (VGS) simulations show that Zombieman is capable of withstanding an onslaught from Carnage Kabuto and regenerate from just a head, although Genos believes the data is somewhat unreliable due to Zombieman's unusual body.[14]

Immeasurable Endurance: Zombieman got famous from one fight against a monster that lasted 140 hours.[3] The Virtual Genocide System's (VGS) simulations show that Zombieman is capable of withstanding an onslaught from Carnage Kabuto in Carnage Mode for an entire week.[14] Zombieman defeated Pureblood despite suffering about 200 lethal wounds in 30 minutes.[15]

Immeasurable Stamina: Zombieman has an incredible threshold for extensive physical activity, displaying one of the most impressive feats of stamina in the series and being able to fight for hours on end while his expedient recovery rate handles the more serious of injuries he suffers. Despite saying that he was exhausted with his fight against Pureblood, he still took his time to kill the remaining monsters and carry the onslaught to other monsters in the room, even with 200 lethal wounds.[16]

Enhanced Strength: Although he is rumored to be the weakest S-Class hero in terms of physical strength,[13] Zombieman is still capable of killing a Demon-level monster, albeit with weapons such as his axe.[17] He is also strong enough to bend a thick steel bar in multiple directions with his bare hands.[18] Zombieman was easily able to pin down Homeless Emperor, whose physical strength was similar to that of a normal human, without the latter being able to break free.[19]

Enhanced Speed: Zombieman can somewhat keep up with a Vampire that can catch bullets, although there were several times in which Pureblood caught him by surprise.

Expert Hand-to-Hand Combatant: When not relying on his long-ranged weapons, Zombieman engages in close quarters combat. Virtual Genocide System's (VGS) simulations show that Zombieman can find a way to kill Carnage Kabuto with a counter-attack after the monster exhausted himself.[14] He seems to possess a decent amount of skill when it comes to close-quarters combat as he defeated Pureblood, a vampire capable of easily catching bullets.

Swordsman: Zombieman has been shown wielding two machetes (which can be seen as swords) at the same time against Pureblood.[20] He is also capable of wielding a machete in one hand and an axe in the other.[21]

Marksman: Zombieman is shown using various handguns with some proficiency.

Proficient Detective: Zombieman has been shown to have some skills in investigation, as he was able to locate Dr. Genus with little information to work with. Zombieman states that undercover work is his specialty, which includes scouting, spying, and investigating monster-infested areas.[6]

Trench Coat: Zombieman's trench coat possesses special properties allowing him to carry a lot of various weapons with him at all times.[22]

Quick Draw Sleeve Gun System: Zombieman possesses a hidden gun supply system tucked within the forearms of his coat. He uses them to procure extra firearms in the heat of battle.[23]

Desert Eagle: Zombieman's signature handgun. Zombieman wields a black desert eagle.[24] The Desert Eagle has Zombieman's experiment subject number, 66, engraved on the gun's frame on the right side.[5] He will often make use of two of them when dealing with stronger foes,[25] and can exchange regular ammunition with heavier caliber ammunition which carries greater stopping power at the cost of greater recoil that will break his limbs.[26]

S&W 500: Zombieman possesses a black S&W 500 revolver.[27] The S&W 500 revolver has Zombieman's experiment subject number, 66, engraved on the gun's frame on the right side. He has not, thus far, utilized it in combat.

Beretta: Zombieman wields a black Pietro Beretta 9mm.[28] Like his revolver, he has not utilized this weapon in combat.

Glock: In preparation for the raid on the Monster Association Zombieman had a Glock pistol concealed inside his own body as an ace up his sleeve. He procures the pistol after his other weapons are destroyed by Homeless Emperor.[29]

Long-bearded Axe: Zombieman's favored melee weapon. Zombieman has been witnessed using a long-bearded axe as one of his primary weapons. The axe has a wooden handle and a larger blade than most axes.[27] It greatly resembles axes used in battles in the Viking Era. He is shown wielding it when confronting Dr. Genus.[30]

Machetes: Zombieman is shown using two machetes that he carries on his back under his coat.[31]

Cigarette Pack: Although not used for battle, Zombieman carries a pack of cigarettes and will smoke when he has the time as a way to relax. 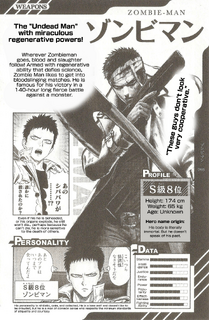