Zakos is a young man with long, blonde hair that is slicked back and has a prominent widow peak. He had green eyes and his eyebrows are prominent, pointing outward. He wears a traditional, red embroidered, pink uniform used in Chinese martial arts, a white belt around his torso, and burgundy red sunglasses. 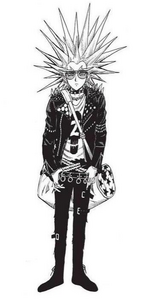 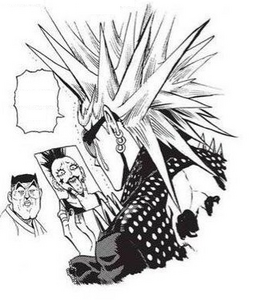 Zakos admiring a picture of his girlfriend

Zakos is very serious about martial arts and is very rude to those he deems to not take it seriously.[1] He also has a romantic streak, wishing to propose to his girlfriend after winning the first match.

Zakos participated in the Super Fight tournament six times before the tournament that took place during the Monster Raid Arc.

Zakos is participating in the Super Fight Tournament at the C-City Super Stadium. This is the seventh time in a row Zakos has participated in the tournament. Zakos wishes to win so that he can propose.[2]

Saitama (disguised as Charanko) converses with Sour Face when Zakos appears and starts questioning Saitama.[3] Sour Face ends up answering some of Zakos questions. Zakos then reveals that Bang was supposed to be one of the judges, much to Sour Face's surprise, and starts mocking the martial arts master. Sour Face starts to feel very insulted, but felt even angrier when "Charanko" did not seem angry at Zakos' comments. Saitama replies that he was not invested in the conversation and is only looking forward to fighting Zakos, but notes that Zakos doesn't seem strong. Zakos retorts by saying he looks forward to the match as well and will beat Saitama to a pulp.[4]

After Max' victory over Lin Lin, Zakos states he would have beaten Lin Lin faster. He later tells Saitama he will beat him so he could fight Bakuzan, but Saitama inadvertently provokes him.[5] He is later quickly eliminated in one slap by Saitama, which blows his chance to propose to his girlfriend. However, the announcer received information that she hasn't even shown up, much to Zakos' displeasure.[6]

As he continues to watch Saitama's matches from the sidelines, a recovering Zakos is unable to fathom Saitama's fighting style.[7] During the match between Saitama and Suiryu, he wondered what they were talking about.[8] During the match, Zakos noted Suiryu took the match seriously and was astounded by his speed,[9] but worried about Saitama's injury and suggested that they stop the match.[10] After Suiryu continues to battle Saitama after he got disqualified for wearing a wig[11], Zakos commented on Suiryu's murderous intent in his attacks.[12]

Zakos was later present at the closing ceremony when it was suddenly interrupted by The Three Crows and Gouketsu, who tells them they will become monsters.[13] Zakos and the other martial artist were given a choice to become a monster or die; visibly frightened he was shocked to see some of the fighters accepting the offer.[14] He later watched Suiryu fight the transformed martial artists and was saved from Choze's energy ball attack.[15] When Suiryu considered becoming a monster, Zakos frighteningly watched, but was relieved that it was never his intention and cheered for Suiryu.[16] Zakos was then knocked out by the crows with the rest of the martial artists.[17]

Not much is known about Zakos' strength, but he was confident enough in his abilities to enter the Super Fight Tournament seven times though it is implied he never won one.

"Even the man they call the greatest treasure of martial arts is getting old, it seems... He's abandoned the dojo and the tournament for some so-called hero activities like he's living in his own dream world."[21]

Retrieved from "https://onepunchman.fandom.com/wiki/Zakos?oldid=176541"
Community content is available under CC-BY-SA unless otherwise noted.