The Whirlwind Iron Cutting Fist martial art revolves around manipulating the air to create razor-sharp whirlwind pressures that slice a user's target.[1] The user then pushes the pieces of the target with varying degrees of force depending on the proximity to the eye of the whirlwind.[1] The cutting pressure can also be implemented into a user's kicks and is sharp enough to cut through stone.[2] Use of this martial art also creates noticeable a pinkish-red aura, similar to the light blue aura of Water Stream Rock Smashing Fist.[3]

Users of this style adopt different forms for different attacks. For more direct attacks, the martial artist may strike with the first knuckles extended, similar to the leopard fist. This draws parallels between Whirlwind Iron Cutting Fist and real-life Leopard Kung Fu. Moreover, the martial artist may extend only their thumb, index, and middle fingers in a clawed fashion similar to the Southern Dragon Kung Fu Fist to produce whirlwinds at a close range.[4] 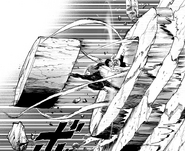 Users apply varying degrees of force to the target depending on proximity to the eye of the whirlwind.