Vaccine Man (ワクチンマン, Wakuchin Man) was a Mysterious Being supposedly born from the release of excessive pollution and waste generated by the industries made by human beings. He claimed he was created as an incarnation of nature's wrath and was tasked to wipe out humanity and thus effectively "vaccinate" the earth against future "infections." He was killed by Saitama.[3]

Vaccine Man was a large, purple hairless humanoid with two rounded antennae on his head. He had a bare muscular body. Vaccine Man also demonstrated the ability of shapeshifting, he could transform into a bigger and complex form, armed with large teeth, claws, and fangs. 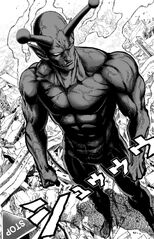 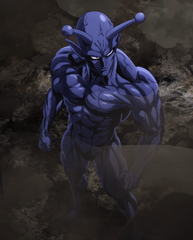 Acting as the anti-villain antagonist, Vaccine Man set out to extinguish humanity for the sake of his interpretation on the status of the environment being poor, as he considered humans to be an "infection" that wither the environment into a polluted, tainted mess of machinery; and carcasses of organisms. The thought of opposition enraged him for he believed he acted out the wishes of planet Earth.[4]

Vaccine Man was supposedly created as a response to the industrial reign over nature. Conceived by nature, in his own words, he has been formed to serve as the apostle of Mother Earth and under the wishes of such. He believes the Earth as a single living organism that is in need of protection and relief of pain, so Vaccine Man has set out to carry out the deed in extinguishing humanity so nature can prosper completely once more. To do this, he has tasked himself to attack the areas where humans are known to live in an infrastructure of technology and artificial order.

Vaccine Man appears next to A-City, creating a crater as a result of his travels. He conceives multiple balls of energy that cause further destruction to the city. Lightning Max and Smile Man were sent after Vaccine Man but are defeated easily.[5] He then notices a crying schoolgirl and proceeds to try to grab and crush her. She is saved by Saitama, whom Vaccine Man questions regarding the hero's identity. Saitama says that he is just an average hero doing average hero things as a hobby.

Offended at Saitama's casual attitude, Vaccine Man launches into a diatribe about his name and purpose while transforming into his second form. Saitama quickly defeats him in a single punch, the staple of the latter's heroic deeds for the rest of the series.[6] Credit for defeating him ultimately went to King, who was passing by and accidentally tripped onto Vaccine Man’s remains.[7][8]

Vaccine Man is a playable character in the video game, One Punch Man: A Hero Nobody Knows.

Vaccine Man was a creature of great strength and size, enough so to be classed a threat level of "Dragon." He could destroy a large part of a big city quickly. He breezed through 31 heroes, some of which included passing by a couple A-Class heroes and making them retreat without even noticing them. He was also said to be perhaps the greatest mysterious being that appeared till that point in time.[9]

Immense Strength: As a Dragon-level Mysterious Being, Vaccine Man was presumably very powerful, although the depths of his strength were never seen. He was strong enough to defeat two A-Class heroes and several other heroes with apparently little to no effort.

Transformation (変身, Henshin): Vaccine Man was shown to morph his hand into a larger spiky form when he was about to crush the schoolgirl. Vaccine Man was also shown to transform into a more advanced form, bearing longer claws, teeth, a darker coloration, solid luminescent red eyes, tusks, and visible scales and spikes. He could mutate only specific parts of his body to preserve energy.[2]

Energy Balls (エネルギー弾, Enerugī-dan): Vaccine Man was capable of shooting energy balls which caused large-scale explosions upon cities.[10] His energy balls are said to be the accumulation of "biological" energy present naturally in Earth.[2]

Flight (飛行能力, Hikō nōryoku): Vaccine Man's supernatural powers also extend to flight. When he does he is surrounded by an aura that's similar to his energy balls and takes off several feet in the air.[10] 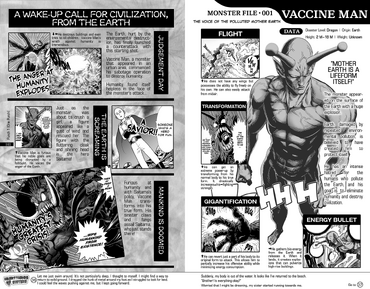