The robots of the Underdog Man series appear as dog-like humanoid robots. They can be easily mistaken for real heroes.

When 3 Underdog Men combine they take on the appearance of a three-headed muscular humanoid beast. Each head has a spiky collar which is tied together with chains and a belt. 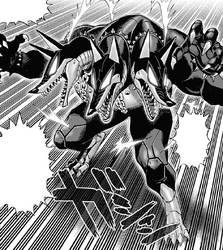 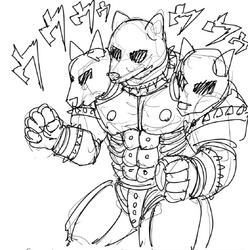 Child Emperor uses it to fight the monster Eyesight and to save the poisoned heroes. After being bitten by Eyesight's poisonous snakes, Child Emperor collects the data and sends it to the Hero Association to create an antidote. Underdog Man No. 22 then grabs Eyesight and self destructs.[1]

As individuals, the Underdog Men are somewhat powerful, and one Underdog Man is capable of holding its own against Eyesight until activating its self-destruct. When three Underdog Men combined to form Mad Dog Underdog Cerberus, the new robot's power is formidable, although G5 was able to destroy it without incurring any noticeable damage.

Dog Paddle Punch (犬かきパンチ, Inukaki Panchi): Underdog Man jumps at its opponent. The full effect of this technique is unknown, as it wasn't able to connect to its target.[3]

Self Destruct: Underdog Man jumps at its opponent and destroys itself with a powerful explosion.[4]

Mad Dog: Underdog Cerberus (狂犬 カマセケルベロス, Kyōken Kamase Keruberosu): Three Underdog Men can combine into a new powerful form.[5]Although it's true power is unknown, as the battle between it and G5 wasn't shown, G5 felt it necessary to unsheath a second katana. An unseen battle took place, and G5 managed to defeat Mad Dog Underdog Cerberus without any apparent injuries.