Salmon
Three-Eyed Ghost (三つ目ゴースト, Mittsume Gōsuto) was a Tiger-level Mysterious Being. It was an aggregation of the negative emotions of the working class.[1] It was presumably killed by Saitama.[2]

Three-Eyed Ghost was a monster with a face that consisted of nothing more than eyes and a mouth. Its body was entirely black with little to no detail and had four arms, two legs, and two horns. It was about eleven times taller than an average human.

Three-Eyed Ghost affects a man into committing suicide before he is saved by Saitama, it then starts openly attacking civilians.

Its abilities were not seen, but it is considered a Tiger-level threat. It was able to destroy a building.

Mind Control: It is said that whoever gets struck by the venomous breath of this being loses self-consciousness and when they find themselves, they realize that they were planning their own suicide.[1] 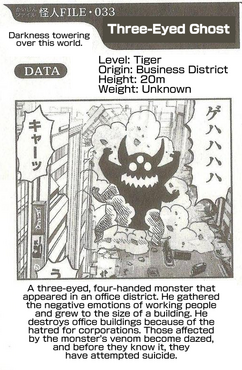