Tatsumaki (タツマキ, Tatsumaki; Viz: Tornado), also known by her hero alias Tornado of Terror (戦慄のタツマキ, Senritsu no Tatsumaki; Viz: Terrible Tornado), is the S-Class Rank 2 professional hero of the Hero Association. She is recognized as one of the Hero Association's most powerful heroes.[3][4] She is an esper and the older sister and self-declared teacher of Fubuki. She and her sister are known as the Psychic Sisters.

After fighting toe-to-toe with Saitama, she became one of the few people aware of his strength.

Tatsumaki is a petite woman, commonly mistaken for being much younger than she really is. She has an adolescent face with emerald green eyes, and green hair that naturally curls up on the ends.[5] She wears a form-fitting black dress with long sleeves, and four high-cut leg slits that show off her legs and low-heeled black shoes. She is occasionally drawn in ONE's simplistic webcomic style. 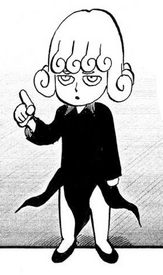 Tatsumaki has a rather brash, moody, hotheaded, and impatient personality. She is disrespectful towards most people, especially to those she deems incompetent. She is completely intolerant to those she deems impertinent, as shown when she slammed Genos into a large piece of rubble for retaliating against her verbal abuse of Saitama. Tatsumaki especially dislikes being ignored or being called things like "brat" and "runt".

Despite her arrogant personality, she feels obligated to defeat monsters and considers her job as a hero to be a duty, accepting any of the Hero Association's requests to defeat monsters.[6] Due to the fact that she tends to get bored when she is not fighting monsters, she also seeks monsters to fight in her own time. She has a bit of a soft side towards her little sister, Fubuki, but she is also very overprotective and controlling of her.

Tatsumaki is extremely confident in her strength. During the S-Class meeting for Waganma's rescue, she claims multiple times that no monster stands a chance against her, and even takes the situation nonchalantly to a certain extent.[7]

Deep down she has a strong dislike for anything that reminds her of her dark childhood past, such as despising the criminal monsters who involve kids like Tareo into dangerous hopeless situations.

In contrast to her younger sister, her great power and confidence make her suffer from a massive superiority complex, believing that she can beat any foe if she is in top shape. This is shown during the fight with Garou, when he adapts and surpasses all of her attacks, she assures him that she would not need more than five seconds if she was at her full power. Furthermore, even after trying in vain to defeat Saitama, she still asserts that she is much more powerful than him, showing her incapability to see or accept the fact that someone is much more powerful than her. Her superiority complex is further explained by Fubuki from the fact that Tatsumaki never faces enemies that are more powerful than herself during her day-to-day hero activities.

The superiority complex Tatsumaki has developed has prevented her from developing any humility and little empathy towards others. This poor self-awareness has caused her to use her power seemingly without caution or care for those around her, and has often prevented her from thinking carefully about the consequences of her actions. For example, her explosive temper caused earthquakes and multiple threats that the hero association tried to respond to when she became angry at Saitama for calling her a brat and a midget. This may be part of the reason why her fellow S-Class heroes and others within the association, while very respectful of her abilities, see her as a spoiled brat and a child rather than an adult, much to her chagrin. Her poor communication skills and prideful attitude have done little to soften this initial impression and are the cause of her poor relationship with her sister.

Confidence in her ability along with past trauma has made Tatsumaki extremely self-reliant, to the point she considers friendships and relationships of any kind to be of no value. She threatened to rip all the contacts and friends out of Fubuki's life calling them parasites and believing them to be the cause of her sister's slow development, though her own poor mentorship and extremely controlling nature are the more likely cause. It has also made her very dismissive of her fellow heroes and she tends to ignore any criticism from them however valid it may be. Her confidence is not baseless, as nearly no opponents have ever proven to be more than a nuisance to her.

Despite her past and the terrible things people have done to her, she still chose to become a hero on her own and help others.[8] She is terrible at socializing and sometimes even getting along with others, but loves her sister dearly. Because of this, Tatsumaki will do anything to make her sister stronger, even if it takes some force, though she never seems to take Fubuki's opinion into account when she does so. She always solves problems physically.

As a child, Tatsumaki always thought she was the cooler one of the two; she figured this had to be true if her little sister, Fubuki, played with her all the time, although this was not the case. It was actually because the kids in their neighborhood were terrified of Tatsumaki, and it led to Fubuki getting isolated from everyone. Tatsumaki was denied any contact with her family or the outside world after being taken away, and it was because of this that she developed an overprotective nature over her sister, which led to her sister resenting her and constantly trying to separate herself from Tatsumaki. Tatsumaki's pride makes her think she is a really good sister to Fubuki, when in fact all of her actions towards Fubuki have damaged their relationship.

As the second-ranked S-Class hero, Tatsumaki is extremely powerful. She is one of the most powerful heroes overall and is the most powerful esper to date.[9] Fubuki describes her as a monster much like Sweet Mask, who chooses not to advance from A-Class to S-Class to prevent weaklings from climbing up the ranks.[10] Darkshine told Garou that if he fought Tatsumaki in his pre-monster form, he would instantly lose.[11]

Psychokinesis: Tatsumaki is the most powerful esper in the series. Her psychokinetic output surpasses even Geryuganshoop.[9] She is capable of effortlessly lifting hundreds of large boulders and stopping a very powerful bombardment attack from Boros' spaceship and sending them back with the same, if not more, force. According to manga illustrator Yusuke Murata, Tatsumaki could lift the entirety of Z-City with ease.[12] She also uses her psychokinesis to fly. Tatsumaki can also sense when her younger sister is in danger.[13] During her call from Hero's Association to discuss the rescue of Narinki's son, she asked Commander Sekingar if she couldn't just destroy Z-city to find him. Her psychic abilities are powerful enough to withstand Psykos's increasing the gravity by 300 times.[14] At full power she was able to lift the entire Monster Association Headquarters out of the ground while simultaneously shielding multiple other heroes inside the facility.

Like all espers, she cannot use her powers if she suffers from a head injury or any brain damage. It has been shown that Tatsumaki's powers destabilize, and to an extent become unusable, when she suffers a concussion after Psykos ambushes her from behind. She was also strong enough to lift Saitama in the air while in a weakened state, although she was only able to lift him a few feet in the air.

Flight: Tatsumaki uses psychokinesis to levitate and fly through the air at high speeds.

Psychic Barriers: Tatsumaki can erect barriers for defense. They were strong enough to withstand Orochi's combined energy blasts with only a slightly singed dress.[15]

Her psychic barrier left her unscathed by Homeless Emperor's full-power assault. With the use of the psychic barrier, Tatsumaki's durability is even greater, being capable of surviving attacks from multiple Dragon-level monsters while she is unconscious.[8]

Chi Manipulation: An ability to immobilize and cause discomfort to a person by bending his/her life force. This power is less effective against people with strong willpower like Golden Sperm, and almost futile against those who have broken their limiter or have come close to such a feat like Saitama and Garou. According to Fubuki, attempting to use this technique on a strong-willed person is just like trying to pin a giant boulder.[16]

She was able to repel the exploding shurikens from Speed-o'-Sound Sonic with ease. She is also able to react fast enough to erect a barrier to protect herself from an attack from Golden Sperm, an attack that S-Class members watching could not even see.

Enhanced Endurance: Tatsumaki is able to remain conscious despite suffering from a heavy head injury.[8]

Master Psychic Combatant: As the most powerful esper in the series, Tatsumaki possesses extreme skill in wielding her psychic abilities, whether it be for offense, defense, or miscellaneous uses. Tatsumaki's knowledge about psychic powers is also as vast as her skill in wielding them.

Retrieved from "https://onepunchman.fandom.com/wiki/Tatsumaki?oldid=178912"
Community content is available under CC-BY-SA unless otherwise noted.