Tanktop Master is a tall, and very muscular man with short, dark-blonde hair and brown eyes. He wears a blue tank top, long pants, and a belt around his waist with his initials and a tank top engraved on the buckle.[3] 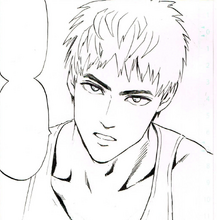 Tanktop Master has a chivalrous nature, which can be seen when he noted that even if Tatsumaki is ranked 2nd, he should not let a "little girl" handle the enemies on her own, despite the fact that Tatsumaki is actually an adult. He is also unafraid to admit defeat, for example, when he was outclassed by the esper with her psychic powers during the encounter of Dark Matter Thieves aircraft. He is a very caring, wise man with honor and pride, and has a great affinity for his brothers and other heroes. This is in contrast to some of his Tanktop brothers, such as Tanktop Tiger and Tanktop Black Hole, who are shown to be very vainglorious and greedy. Additionally, he does not approve of his tanktops disrespectful behavior, and scolded them when they were rude towards Bang.[4] Despite his willingness to admit defeat, he was still irked when Saitama said he "got his ass kicked the hardest."

Tanktop Master has an odd belief that true power comes from tanktops, as seen when he observes Bang dominating Metal Bat in their sparring match, he concludes that the secret to Bang's power is that he has a tanktop hidden underneath.[4] However, this belief changes after being defeated by Garou.[5]

During the battle against the Monster Association, Tanktop Master showed more of his heroic side when aiding Pig God in saving the members of the Narinki's Private Squad and stayed behind despite the great risk in facing two Dragon-level threats. [6]

Tanktop Master, as an S-Class hero, is one of the strongest heroes in the association as well as one of the physically strongest men on the planet. In his fight with Garou, who was able to defeat elite A-Class heroes with ease, he was able to not only harm Garou but hold the upper hand against the Hero Hunter for the beginning and middle of the fight,[7] before being overwhelmed by the latter's advanced martial arts.[8] It was noted by Garou that Tanktop Master's physical strength equaled that of Genos with the Post-Super-Fight-Arc Upgrade.[9] However, against the Dragon-level executives of the Monster Association, Tanktop Master was helpless and overpowered by Fuhrer Ugly and Gums.[10]

Immense Strength: Tanktop Master possesses great physical ability. This can be seen when he hurls a large block of concrete at both great distance and extreme velocity towards the Dark Matter Thieves' spacecraft.[11] He was able to break apart and shake the ground with a single punch, causing Garou to lose his balance momentarily.[12] Unlike his fellow Tanktoppers, he could defeat one of Bofoi's drones with a suplex as well as force back his giant construction drone with his arm strength alone.[1][2] He also defeated the monster Gyoffrey by sending it flying through a wall with a tackle despite still recovering from his injuries in the fight with Garou.[13] Tanktop Master claims that he has more "tanktop power" than all of the Tanktop army combined.[14] His incredible strength is once again shown when he lifts and throws a transmission tower through the air at incredible speed, amazing the other heroes standing nearby with such a performance.[15] He continued to show great prowess in his throwing abilities, as he was able to hurl large chunks of rubble at the fusion of Psykos and Orochi and eventually even a building containing the likes of Superalloy Darkshine and Puri-Puri Prisoner, albeit with the help from Fubuki, who enhanced his physical prowess.[16] Additionally, Tanktop Master is also capable of resisting Gums, a Dragon-level threat able to crush heavy machinery with its jaws, to chew him, albeit with great difficulty.[17]

Immense Speed: Tanktop Master was fast enough to catch Garou by surprise in their fight, able to hit him with speed that shocked the Hero Hunter.[18] Although unseen, he was able to outrun the falling ship of the Dark Matter Thieves before it crashed on the ground.[11] Tanktop Master can also travel at greater speeds than running by throwing huge projectiles at high-speed and grabbing hold of them; letting their momentum pull him through the air in a form of pseudo-flight.[19]

Immense Durability: Tanktop Master has a high level of durability, as he was able to stay up after taking multiple hits from Garou, whereas his fellow tanktop army was defeated by single hits from the Hero Hunter.[20]

Enhanced Senses: While fighting Garou, Tanktop Master was able to sense evil intentions from him.[21]

Pain Endurance: Tanktop Master has a high pain tolerance, as demonstrated during his battle against Garou where he did not show much signs of pain even though the Hero Hunter had targeted his vital spots and severely injured him with a barrage of thrust strikes.[22] Furthermore, when having both of his forearms mangled by Fuhrer Ugly, Tanktop Master was only seen mainly shocked at the injury rather than the pain.[23]

Expert Hand-to-Hand Combatant: Tanktop Master apparently mastered the 'versatility' of the Tanktop, which he, according to his brothers, uses to increase the power of his attacks. His style of fighting consists of several punches and wrestling moves. However, as Garou evaluates, Tanktop Master mainly relies on power rather than technique. Tanktop Master has been seen on numerous occasions using his brute strength to throw massive objects a great distance.

Expert Marksmanship: Tanktop Master can throw extremely heavy objects with very high accuracy, as demonstrated when he was able to launch a transmission tower towards the spire at the site of the battle against Psykos and Orochi over a great distance.[24] Additionally, he was able to throw heavy chunks of debris and a building in the sky towards the fusion of Psykos and Orochi's jet form, even intercepting an energy blast from the monster with a boulder.[25] His throwing prowess is so much so that it was a main component of the plan to take down the Psykos-Orochi fusion.[26]

Tanktop: Tanktop Master wears a dull blue tanktop during training and battle, claiming it boosts his strength. It is unknown if this claim is actually true. It is also extremely tight, so much so that it was able to act as a defibrillator by restarting his heart as it snapped back from Bang's grip.

Attack Specialized Tight Tanktop: Tanktop Master wears this variant of the tanktop during his fight with Heavy Smoker. It boosts the wearer's strength due to the increased pressure on the body, but it can only be used for up to three minutes before it begins to suffocate the wearer. With this strength, Tanktop Master was actually able to deal some damage to the Dragon-level threat, though still failed to defeat him. 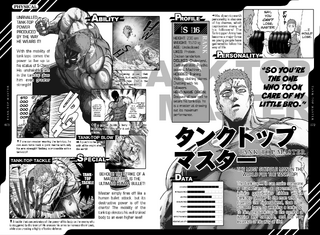