Episode 14
The Tank Topper Army (タンクトッパー軍団, Tankutoppā-gundan) is a group composed of the Tank Toppers, under the leadership of the S-Class hero Tanktop Master.

Every member of the Tank Topper Army wears a tank top. The designs of each member's tank top vary. 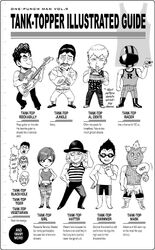 Every member of the Tank Topper Army takes great pride in their tank tops and associates them with a symbol of strength and pride. Many of the members are shown to be extremely rude and arrogant towards everyone but their leader, although Tanktop Master does not approve of this behavior.[1] All of the members of this army worship the words of Tanktop Master, and believe that the path to true strength is through tanktops: ironically, Tanktop Master believes this more than anyone, as seen when he observes Bang dominating Metal Bat in their sparring match, he concludes that the secret to Bang's power is that he has a tank top hidden underneath.[2]

Tanktop Tiger was asked by a civilian about a suspicious person, the person being Saitama. Tanktop Tiger immediately yells out his names introducing himself to Saitama and disregard him of being a new hero. Tanktop Tiger taunts Saitama to look better, but was cut off by Speed-o'-Sound Sonic, who threw exploding shurikens at him, leaving him unconscious.[3]

Tanktop Master attends the S-Class hero meeting, there he recognizes Saitama's name, but is unable to recall where he had heard it.[5] During Dark Matter Thieves invasion on A-City, Tanktop Master attempts to assist Tatsumaki, but fails after realizing he is no match for her psychic powers.[6]

Tanktop Vegetarian happens to encounter Garou, who began his hero hunt and is easily defeated by him.[7] After being released from the hospital, Tanktop Vegetarian, alongside the entire Tank Topper Army, track down Garou who is about to fight Mumen Rider, but is struck immediately. As Garou declares to murder every member, Tanktop Master appears and punches him and proceeds to hit him with Tanktop Tackle, but to his surprise Garou is still able to stand.[8] Tanktop Master and Garou later continue their fight, with the former having the upper hand. As he is about to finish the fight, Mumen Rider steps in, stopping the fight, believing the Hero Hunter had already taken enough beating, to which Tanktop Master agrees. However; Garou chooses not to leave and decides to utilize his true martial arts style, Water Stream Rock Smashing Fist, in battle, easily defeating Tanktop Master along with all of the Tank Topper Army members and Mumen Rider.[9]

Tanktop Master leaves the hospital with Mumen Rider in order to assist the civilians that are waiting for aid in the Z-City area.[11] The rest of the Tanktop Army are inspired by their leaders' actions and follow in his steps by going towards Z-City to further help with the situation.[12]

After the incident with the Monster Association, many of its members quit, including the A-Class Tanktop Vegetarian.

While the depths of most of their power hasn't been seen, many of the members of the Tank Topper Army are in the Hero Association, with some of them holding decent spots in the rankings. When working together, the Tank Topper Army can defeat a Demon-level monster, although it's unclear as to how much Tanktop Master assisted the others in the battle.[13] Unfortunately, they were all utterly decimated by Garou, including Tanktop Master.[14]

The tank toppers are seen training after the battle with the Dark Matter Thieves when a mysterious robot appears outside the Hero Association headquarters and the tank toppers are asked to defeat it. The giant vehicle launches several drones and only Tanktop Master is able to defeat one. It is soon revealed that the vehicle and drones belong to Metal Knight who later cleans up the city and builds a new Hero Association headquarters in just a week.