Start a Wiki
watch 01:42
Hero Spotlight: Sweet Mask
Do you like this video?

Handsomely Masked Sweet Mask (イケメン仮面アマイマスク, Ikemen Kamen Amai Masuku; Viz Amai Mask aka, Handsome Kamen[3]) is the A-Class Rank 1 professional hero of the Hero Association. Apart from his hero profession, he is a famous model, actor, and singer and is the most popular star in the world.[4] In addition to his job as a hero, he is a member of the Hero Association hero rank evaluation staff.[2]

Sweet Mask's real name is Beaut (ビュウト, Byūto). Although he initially looked down on Saitama, he is now one of the few people aware of his true strength. He formed an obsession for Saitama's strength after witnessing his battle with Garou, stating that he possesses the "true beauty of overwhelming strength." He is currently aiming to create the perfect hero out of Saitama.

Sweet Mask is a tall, lean-built young man with messy, shoulder-length light blue hair and yellow eyes. He is considered to be very handsome by the public. He wears a white jacket over his gray shirt with a green circle necklace and black trousers. During the battle against the Deep Sea King, he was sporting a shorter hairstyle with his hair parted to the left. He is seen with longer hair when he addresses the Hero Association official, and in his most recent appearance, he is again shown with his short hair. Interestingly, Sweet Mask's eyes seem to turn from a yellow into a blood-red when extremely angered.[5]

Sweet Mask used to be ugly, so he did hero work in a mask to hide his face. He only gained his beautiful appearance after transforming due to his hatred for his ugliness.[6]

During his fight with Detestable Clown, Sweet Mask revealed the face underneath his mask.[7] 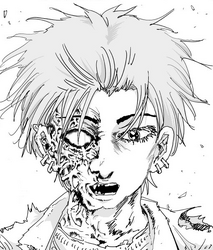 Sweet Mask has stated that he believes that heroes are to protect the citizens, and if they can't do that, they must become strong enough to be able to do so. He appears to be quite popular and has quite a charismatic way of talking. He also genuinely cares for the well-being of the citizens around him and wishes happiness upon every living thing in the universe.[9] Moreover, Sweet Mask can even stress himself out when thinking about new ways to please his fans.[10]

However, befitting the darker side of Sweet Mask's name is his hidden merciless nature. He is shown to have a burning hatred for anything that he sees as evil. Anything that he declares as evil must be swiftly and thoroughly exterminated.

This is shown when he mercilessly dispatches a group of captured aliens whom he declared to be evil, claiming to have merely executed justice on the spot, and again when he was ordered to bring an escaped caveman back to the lab. He ignored his superiors' orders and killed the caveman instead.[11]

Sweet Mask is shown to adhere to any method that makes heroes popular. He notes that only promotions to S-Class or A-Class are fit for his attention, as they are the heroes who draw the most attention from the public, and hence, any heroes in those ranks who earn themselves negative reputations would drag his reputation down as well. Because of this, Sweet Mask stays in the A-Class Rank 1 position to prevent unworthy heroes from promoting to S-Class.

Sweet Mask is very narcissistic about "beauty overwhelming the power", as he said about his philosophy that "heroes have to be beautiful as well". This became obvious when he showed interest in a worthy S-Class Hero like Genos, who has both a beautiful appeal and having done more heroic deeds as the main priority, fitting Sweet Mask's philosophy. Or while chewing out the S-Class heroes whom he believed were unworthy of their positions, opting to subordinate them while filling in as team leader of the Monster Association raid.[12]

Likewise, Sweet Mask has infinitely less love for people who succumb to the power of evil he so venomously despises. Demonstrated when he mercilessly cut down Narinki's Private Squad after they'd been brainwashed by Do-S, just before brutally murdering the female monster even though she'd surrendered.[13] This oversight also highlights his mistrust of those who seem a little more or less than human by his regard. Given how he questioned Zombieman's credibility as a human being, much less a hero, going by his odd abilities and asking why he couldn't die during the S-Class hero meeting.[14]

However, after witnessing the defeat of Garou by Saitama, his viewpoint changes and becomes more focused on the overwhelming power of the individual than beauty alone.[15]

He believes in a grand justice that will illuminate the world, and a hero who represents a great hope that everyone can see and latch onto. His plan is to have Saitama be the symbol he envisions.

His hatred for all things ugly stems from the fact that he himself once had an ugly face and chose to wear a mask out of shame. This intense hatred of his own ugliness caused his body to change and for him to become a Mysterious Being. Before he became a mysterious being, he attempted to be beautiful on the inside and adhere to strict moral principles. He even attempted to perform good deeds for the community, such as picking up litter, although no one paid attention to him. But when he transformed into a handsome man, his popularity skyrocketed to where it is now due to his extremely good looks. He initially viewed the public as vain for being blinded by outward beauty, but realized that he'd become just like them.

Sweet Mask reveals that his transformation has begun to corrupt and monsterize him, being responsible for the more bloodthirsty and ruthless side of him and making him lose his humanity. Killing monsters has been the only way he's stayed on humanity's side, and he's become more merciless, willing to make the sacrifice with the fewest casualties without hesitation while acting as though the choice was difficult for him. According to him, he'll eventually view justice as another symbol and completely cease to understand what it means to be human, something which he fears greatly.

As the top-ranked A-Class hero, Amai Mask is an extremely skilled and powerful individual. He is also far superior to everyone else in this class, and his skills are strong enough to put him in S-Class. He claims to be stronger than Atomic Samurai and is even confident enough in his abilities to stand up to other S-Class heroes, such as Flashy Flash. He chooses not to advance to S-Class so as not to allow weaklings to rank up. Fubuki describes him as a monster, much like her sister Tatsumaki, who is the second highest-ranked hero within the association. Fubuki, even after witnessing Saitama's display of power in the fight against her, was also convinced it would be impossible for him to surpass Sweet Mask. However, he has a very peculiar weakness; extreme ugliness paralyzes him, making him unable to move well and fight back, which renders him particularly vulnerable against Ugmons.[16] Besides his combat abilities, Sweet Mask is a talented actor and singer.

As confirmed by Atomic Samurai, he's definitely S-Class worthy, and can take on multiple dragon level opponents at once.[17] Despite this, he states he has never defeated a Dragon-level mysterious being by himself.[18]

Immense Speed and Reflexes: Sweet mask is extremely fast. He was able to kill a group of captured alien invaders before the nearby S-Class heroes could react. He effortlessly evaded Suppon's barrage of attacks and maneuvered behind him, striking him down with only two blows before the caveman could retaliate.[19]

More remarkably, he managed to fight off several clones of Black Sperm, a Dragon level monster. He was also able to dodge some of Evil Natural Water's attacks, which, according to Child Emperor, move faster than the eye can register, while still fighting against Black Sperm.[20] When attacking Garou, he managed to land 25 hits within seconds.

Immense Strength: Sweet Mask possesses incredible brute strength. During a concert, he forcibly manipulated a monster's movement without interrupting the flow of the performance.[9] He can also lift large pieces of rubble with ease, and destroyed the tanks that housed the Monster Cells with a few swipes.

He was able to lift a boulder much larger than he is with ease, as well as throwing it with great force. He also broke the hand of one of Black Sperm's giant clones with a single hit.[21]

Immense Endurance: Possibly due to his abnormal body, Sweet Mask seemed to feel no pain upon being pierced through the chest by Evil Natural Water, and resumed fighting normally.[22]

Abnormal Body: By unknown means, Sweet Mask was able to reattach his severed arm. According to himself, he was able to reattach it as it was a clean cut. He was also somehow able to regenerate his smashed face after Garou punched it. Sweet Mask's body seems to be capable of healing quickly from potentially lethal wounds. However, he doesn't seem to have the ability to regrow a severed limb, as he reattached his arm instead of just regrowing it.[23] Additionally, something peculiar about Sweet Mask is when angered, his body mutates, and the veins in his face grow in size. This is revealed to be because he is in fact a Mysterious Being who mutated due to his intense hatred for ugliness.

Master Hand-to-Hand Combatant: Sweet Mask is an extremely skilled fighter. During his fight against Suppon, he first moves in the latter's blind spot, incapacitates him, and then delivers a lethal strike.[19] Sweet Mask's fighting style is brutal and efficient; he obliterates his opponents before they can retaliate. He wastes no movements when he massacres Narinki's Private Squad.

The following section contains original webcomic spoilers. Expand to see spoiler content.
Despite being unable to fight back, he took no notable damage against Fuhrer Ugly, a Disaster Level Dragon monster. He managed to repel the continuous assault of Black Sperm's clones, who easily broke through Atomic Samurai's defense, prompting the latter hero to comment that Sweet Mask and Black Sperm were even, at least temporarily.[17]

High Accuracy: Sweet Mask has shown some impressive feats of accuracy, particularly seen when approached by Fuhrer Ugly: when the monster was jumping all across the ceiling and walls of the hallway, Sweet Mask accurately threw a monster head he had in his hand directly at Fuhrer Ugly while the monster was still approaching him.[24]

Retrieved from "https://onepunchman.fandom.com/wiki/Sweet_Mask?oldid=168665"
Community content is available under CC-BY-SA unless otherwise noted.