After the battle against the Monster Association, Darkshine loses all his confidence as a hero. He consequently quits the Hero Association and joins the Neo Heroes to work as a training instructor and sparring partner.

Superalloy Darkshine is a very tall and extremely muscular man. His skin has a dark complexion and gives off a lustrous shine. His head is bald, and he has full lips, dark eyes, and thick eyebrows. His only attire is a black speedo. When Darkshine flexes, his muscles seem to grow to unnatural levels. In the heat of battle, Darkshine's overwhelming presence causes him to look much larger than he usually is, as he appeared to dwarf Puri-Puri Prisoner despite being only a few inches taller.

As a child, Darkshine was thin and frail. He had medium-length black hair and light skin. 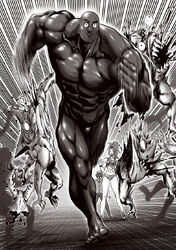 In contrast to his imposing outer appearance, Superalloy Darkshine is a level-headed individual who dislikes conflict. During S-Class hero meetings, where many egotistical individuals meet, Darkshine often tries to assume the role of mediator.[1] Superalloy Darkshine is a rather vain person, as when he was sitting at a meeting with other S-Class heroes, he wondered whether everyone's eyes were glued to his body and whether or not he was the shiniest person in the room.[4]

Despite his vanity, he does respect other heroes like Tatsumaki, King, and Genos. Additionally, he's shown to care deeply for others, and usually treats those he encounters with politeness and respect. He was also very kind to Mizuki, even though she's only a B-Class hero, and protected Mizuki from a string of attacks from monsters, insisting that she rest while complimenting her muscles.

When engaging against foes or incoming danger, Darkshine normally shows an unfazed blank expression that indicates the supposed enemy or danger does not affect him, paralleling Saitama's emotionless gaze, as well as the nonexistent effort he puts into a majority of his fights with Tiger and Demon-level monsters. However, when he battled Garou he took on a much more serious demeanor and looked enraged as he declared he would put an end to Garou's monster play.

As a child Darkshine had no semblance of self-confidence, being poor at sports and losing in any game he played; that changed after years of weight training where he had reached a point of weight lifting that could no longer be quantified by numbers and, through his many battles and flawless victories, became successful and gained an immense degree of self-confidence. He now possesses a confident, if a bit arrogant, personality that hides his previous meek and weak personality. His big muscles appear to serve as a way to pump up his ego and fuel his self-esteem, as when confronted by Garou, the hero hunter claimed that Superalloy Darkshine was only playing the part of a hero when in reality he was just an egotistical jerk. Darkshine is significantly affected by Garou's words, realizing that he never fought a battle he didn't think he could win, and momentarily has an emotional downfall.

Despite his fight and attitude toward Garou, Darkshine is shown to be a caring and empathetic individual. Even after his fears and insecurities sprung upon him again from Garou, he showed concern towards Garou when he had a sudden collapse and afterward as Tatsumaki was about to rip the Monster Association base out of the ground. He went as far as to tell Garou to run as he would get crushed if he stayed.

However, he eventually confronts his hidden insecurities once again after fighting Garou and became even braver.

After his defeat at the hands of Garou, he became far more humble and does not show off his muscles anymore. However, it is clear that he has lost confidence in his abilities as a hero, so much so that he retired from his work as a hero and now works as a training instructor for the Neo Heroes.

As an S-Class hero, Superalloy Darkshine is very powerful. In terms of physical strength, Darkshine is arguably the strongest S-Class hero and is self-proclaimed as one of the strongest S-Class heroes, alongside Tatsumaki and King. Darkshine is notable for his remarkably high durability, which is said to be perhaps the most indomitable in the hero world (without the knowledge of Saitama's invulnerability). His massive size, nigh-invulnerability, and sheer strength make him the most physically fit hero in the S-Class, above the likes of Tanktop Master and Puri-Puri Prisoner. In his fight against Garou, it is stated that he is the one considered to be at the pinnacle of physical combat.[5] Virtual Genocide System's (VGS) simulations show that Darkshine is capable of defeating Carnage Kabuto in Carnage Mode after only fifteen minutes, although it required Superalloy Darkshine to use his maximum power to finally finish him.[6] With a light touch he would be able to destroy a monster who is as strong as the Deep Sea King.[7]

Immense Durability: His defense is stated to be number one in the hero world.[1] Darkshine is said to have trained his muscles in a completely different fashion than Tanktop Master and Puri-Puri Prisoner.[8] Darkshine's impressive muscles act as a type of pseudo-armor, displaying a masterful combination of hardness, strength, and toughness, making him seem to be nearly indestructible. His skin and muscles are invulnerable to Destrochloridium, a Tiger-level monster's drill hands, which were as strong as steel, as his skin and muscles were left completely unscathed.[9]

Darkshine was able to withstand the fall of heavy and large debris of crumbling buildings completely unfazed during the initial attacks against the Monster Association.[10] While looking back at Mizuki, he was able to talk to her while getting repeatedly attacked by multiple monsters in front of him, taking no damage whatsoever.[11] It has been simulated that Darkshine is able to take hits and survive a fight with Carnage Kabuto, a powerful Dragon-level threat, saying himself that the monster was just "stronger than he thought."[6]

Against the Demon-level monster Bug God, Darkshine was able to effortlessly sustain attacks from the monster both before and after it transformed.[12] According to Darkshine himself, despite his enormous strength, he doesn't even know of a way to hurt his own body due to how durable it is.[13] He is durable enough to withstand attacks from Dragon-level monsters, such as Garou before the Hero Hunter started evolving again,[14] the latter of which defeated Puri-Puri Prisoner with no effort.[15] In one instance, Darkshine challenged the S-Class hero Silver Fang, to a sparring match where he did not sustain any damage; however, all of his attacks were deflected and he got smashed to the ground over and over.[16] He was also able to block the brunt force behind a barrage of attacks from Garou's Cross Fang Dragon Slayer Fist, a combination of the martial arts of both Bang and Bomb, for an extended period of time.[17][18] However, eventually Garou evolved to the point of causing Darkshine to cough up blood and have a small nose bleed. Even so, Darkshine received minimal damage before Tatsumaki's interruption in his fight with Garou, as his body remained practically unscathed despite being beaten down by a nearly evolved Garou's barrage of attacks, and he would only be beaten due to his fear of being defeated and his insecurities rather than actual, physical damage.[19] Additionally, when Darkshine resurfaced, Sweet Mask would angrily berate the hero and kick him repeatedly, only to leave him unscathed.[20] Darkshine also received the full brunt of Evil Natural Water's jet streams that destroyed Iaian's sword and only remarked that it was a "nice shower."[21] Furthermore, he was able to effortlessly withstand being swarmed by countless copies of Black Sperm without a scratch. Darkshine's immensely durable body also allowed him to resist Gums's stomach acid, which is able to digest debris almost instantly, albeit he still felt visible pain and it was burning his skin.[22]

Darkshine's seemingly indestructible durability has its limits, which is seen after Garou nears the completion of his evolution and fully transforms to physically harm the hero and incapacitate many other of the S-Class heroes. After Garou's evolution, Darkshine stood up twice after taking a hit by the Human Monster, which makes him the only hero capable of doing so other than Saitama and Flashy Flash, and remained conscious after a beating.

Immense Strength: Through years of intense weightlifting, Superalloy Darkshine attained remarkable strength. Even before attaining his current level, he could lift two tons with one arm.[24] Currently, Darkshine's strength is said to be unrivaled and impossible to quantify, surpassing most, if not all, of the S-Class heroes' physical strength.[25][26][27] He defeated Destrochloridium by merely clapping his hands together, which reduced the mysterious being to mere specks.[28] Before the initial attack of the Monster Association, Darkshine was seen squatting a car to warm up.[29] During the initial attack of the Monster Association, Darkshine was capable of destroying the monsters by simply waving them away[30] or just by casually running as they got in his way[31] and he was even shown to lift and ragdoll one part of a train easily.[32] It has been simulated that Darkshine at maximum strength is able to defeat and finish off Carnage Kabuto in Carnage Mode.[6] Moreover, Superalloy Darkshine can kill a monster as strong as the Deep Sea King with a light touch.[7] Darkshine was also able to blow off Bug God's, a Demon-level monster known for its durability, entire upper body and kill the monster with a simple punch.[33] Due to his immense strength, Darkshine has had super heavy lifting weights made for him by the Hero Association per his request.[34] He has also been seen weightlifting in a training room with 15 times Earth's normal gravity.[35] In a single tackle, he was able to shatter all of Garou's ribs which Garou was unable to redirect using Water Stream Rock Smashing Fist due to the sheer amount of power behind it, while Tanktop Master was only able to moderately damage a much weaker Garou with a similar type of attack.[36] Additionally, Darkshine could make an evolved Garou stumble with his Superalloy Double Bazooka,[37] and even splatter the entire water body of Evil Natural Water with a single punch.[38]

Immense Speed and Reflexes: Despite his size, Darkshine is surprisingly fast. He was able to keep up with Dragon-level threats such as Garou before the latter started evolving again, when the Hero Hunter tried to confuse him by creating a flurry of afterimages that attacked him from all directions, Darkshine managed to react to and punch the real Garou, knocking him back.[39] He was also able to move so quickly that he was able to get the drop on Garou with a frontal attack.[40] It has been simulated that Darkshine can even keep up with Carnage Kabuto in Carnage Mode, a very powerful Dragon-level Mysterious Being that could easily outmaneuver Genos.[6] Furthermore, Darkshine was fast enough to react to and quickly move himself to defend Iaian from Evil Natural Water's high-speed jets with his own body.[41]

Master Hand-to-Hand Combatant: Darkshine is said to be on par with Silver Fang as the best hand-to-hand combatant in the Hero Association.[42] He was also able to keep up with Garou for a period of time during their fight. Both Puri-Puri Prisoner and Zombieman were surprised that Garou bested Darkshine in hand-to-hand combat, further supporting the hero's great fighting prowess.[43] 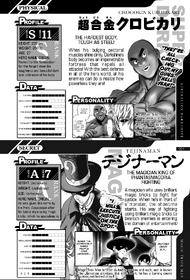