Stinger (スティンガー, Sutingā) is the A-Class Rank 10 professional hero of the Hero Association.

Stinger is a tall, lean-built young man with spiky black hair. He wears a tight black suit, which appears to be made of bandages. He carries a large spear with him that has a brown handle and a large spearhead at the end.

Stinger is a confident and charismatic individual who takes pride in both his hero rank and popularity in polls. He seems to overestimate the threat level of monster, thinking he defeated a God level threat, only to be a somewhat strong Tiger level one. However, he is not reckless. He did not utilize one of his signature moves against the Seafolk until the bystanders had vacated from the area. He also stopped his attack from hitting a fellow hero that Garou used as a shield. Surprisingly, he endured attacks from multiple Seafolk on purpose in order to buy time for the civilians to escape the fighting scene, showing a more selfless side of him.

He is happy to work together with other heroes, and is unwilling to abandon them when they're in danger; he rushed to Glasses' aid when Garou was beating him up, and also helped Lighting Genji stand on his feet after he was struck by a Demon-level monster. However, he is susceptible to goading and is quick to react to taunts.

He also seems to challenge monsters who are above his capabilities.[2] However, he is not delusional, as seen when he ran from the mother Grizzly Nyah.

As a high ranking A-Class hero, Stinger is a very skilled and powerful fighter. He is able to defeat six monsters of disaster level Tiger on his own at the same time, which is impressive considering that it takes an S-Class hero to take on 10. Against Demon level monsters he is not helpless either, as he was able to severely damage the Demon-level monster child Grizzly Nyah with a single thrust of his spear.[3] This is impressive considering that it takes an S-Class hero to beat a Demon level threat. Okame-Chan estimated his body strength to be 1600, which is higher than Darkness Blade and a bear, but lower than Child Emperor and Great Philosopher. He was able to reach the top ten of the A-Class within six months of joining the Hero Association.[1]

Enhanced Strength: Stinger has enough power to mutilate and kill multiple Tiger-level monsters of the Seafolk with single spear thrusts, as well as being able to sever the arm of the Demon-level monster child Grizzly Nyah with a single thrust of his spear as well.

Enhanced Speed and Reflexes: Stinger possesses decent speed and reflexes. He was fast enough to kill multiple Tiger-level monsters before they were able to react and was also fast enough to land attacks on a child Grizzly Nyah, although this was while the monster was stunned thanks to the attack of Lightning Genji. He was able to react and stop the mid-air charge from Garou against Gun Gun and proved fast enough to attack and barely miss Garou, albeit the Hero Hunter was weakened at the time.[4][5]

Enhanced Endurance and Durability: Stinger showed admirable stamina and durability, as he was able to endure attacks of six Tiger-level Seafolk on his own in order to buy enough time for the civilians to escape the fight scene, while enduring attacks and ultimately coming out on top. It was stated that he held back and purposedly tanked attacks from the Seafolk to allow the civilians to escape. Additionally, he was able to survive a powerful punch from the Deep Sea King, which is impressive considering that he's a Demon-level monster, and Stinger had already been quite injured and is only an A-Class hero. He also survived a serious beating from Garou, who was capable of knocking out and dismembering higher-ranked A-Class heroes without needing to use Water Stream Rock Smashing Fist.

Expert Spearman: Stinger is very adept at using his bamboo shoot spear. He took down multiple Seafolk, a considerable feat considering their disaster level of Tiger. He was also able to take the limb of a Demon-level monster with one attack of his spear.[3] 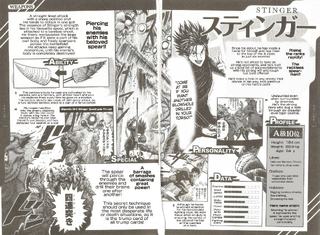