Spring Mustachio is a lean-built man with short black hair combed to the left side with curled sideburns, yellow eyes with several wrinkles on the bottom of his face and a thick handlebar mustache. He wears a dark green suit and pants with a white collared shirt and red bow tie.

Spring Mustachio is an intelligent, serious man who doesn't back down, as shown by his persistence in fighting Kombu Infinity, even after being beaten up rather badly. He also shares a bond with fellow A-Class hero Golden Ball, as they regularly pair up to hunt monsters and share drinks in their spare time.

Spring Mustachio is content to stay in the lower ranks of the A-Class.

At some point in the past he trained under Nichirin and became one of his top disciples from his Conglomerate school.[2] He comes from a very rich family and instead of taking on his parents' job as a company manager, he chose to become a hero[1] and a dishwasher outside of his hero job.[3]

After realizing that Golden Ball was absent for their usual drink, Spring Mustachio goes to his aid in his fight against Garou. Spring Mustachio slices erratically in the narrow alleyway, forcing Garou to jump. Spring Mustachio then initiates his secret move, Tomboy. Garou dodges the attack and grabs the guard of the sword even though the sword stabbed through his hand. Succeeding the dodge, Garou punches Spring Mustachio, knocking Spring Mustachio into a pile of trash cans and crates. Garou says that he already knew about Spring Mustachio's secret technique, and that the fight helped him adapt to armed combatants.[8]

Spring Mustachio appears alongside his master Nichirin and the rest of the Council of Swordmasters to help in the fight against the Monster Association executives.[9]

This section is missing information. You can help by expanding it.

Spring Mustachio was among the many heroes summoned by McCoy to combat the monster that was devastating the Z-City police station. He arrives at the scene late, after Saitama has already killed the monster.[10]

The Hero Association dispatches Spring Mustachio and a group of heroes to defeat Vaccine Man. However, the monster is too strong for them. After Saitama kills the monster, King appears at the scene to retrieve his video game, and the heroes mistake him to be the hero who took down the monster.[11]

Spring Mustachio is a playable character in the video game, One Punch Man: A Hero Nobody Knows.

Enhanced Speed: Spring Mustachio was able to pass a block with a few leaps.[12] He also managed to dodge some of Kombu Infinity's tentacles. His speed was great enough that Garou was forced to dodge by jumping upwards in order to avoid Spring Mustachio's rapid slices.

Expert Swordsman: One of the top fencers and pupils of Master Nichirin, Spring Mustachio has an incredible aptitude in swordsmanship, especially in the use of a foil. He has been shown to be able to parry at a rapid pace, blocking several attacks almost at once.

Rapier: Spring Mustachio uses a rapier with a cup hilt. The blade is composed of spring steel. He stores his blade in the form of a handkerchief that he keeps in his breast pocket.[15] 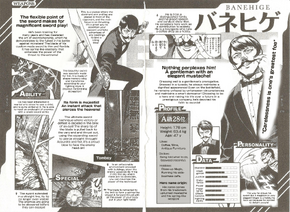