Speed-o'-Sound Sonic (音速のソニック, Onsoku no Sonikku), more commonly called Sonic (ソニック, Sonikku), is a recurring villain and occasional anti-hero. He first appeared as a bodyguard hired by Zeniru.[5] He is a former member of the 44th Graduation Class of the Ninja Village, nicknamed The End (終わり, Owari; Viz: The Final).[6] Sonic is also a self-declared eternal rival of Saitama.[7]

Sonic is a slim young man. His long black hair is normally tied up in a topknot, and bangs fall over his face. A noticeable feature of his is the purple marks underneath his large gray eyes. He usually wears a tight black bodysuit highlighted by metal plating on his shins, arms, shoulders, chest, and waist, as well as a long purple scarf that falls to his legs. During his fight with Genos, Genos ripped his scarf and tore off his topknot, leaving the ninja with short hair.[8] 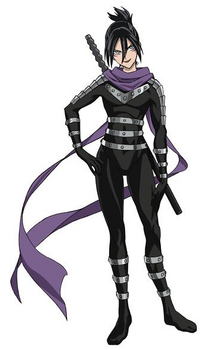 Sonic has a large ego, and when he sets his mind to killing someone, he refuses to give up until he succeeds, unwilling to tolerate the existence of someone more capable who has directly beaten him.

Sonic has no regards for human life other than his own, and even takes pride in the fact that he has never let an opponent live.[9]

To that end, he holds considerable disdain for the world, being quite cynical, especially towards heroes. As shown when meeting Genos for the first time, he tells him that heroes can neither win against a truly strong opponent nor can they truly protect anything.

Despite the way he presents himself, Sonic has a soft side, something seen when training to fight against Saitama. During this period, he spent a great deal of time with Frank, a hunter who had almost been killed by a bear and confides with him his inner turmoil. While he is pacing himself, Speed-o-Sound finds and befriends a little piglet as well, naming it Ino, thus showing his more noble side. When Sonic leaves to search for Saitama, he gives his words of wisdom to Frank, saying that if he is too confident in his fighting style and loses, the result will always be the same. It is unclear as to how far this side of him goes to, as he was willing to warn Genos of the Deep Sea King, yet fought him when Genos interfered with his battle with Saitama.

Due to constantly losing to Saitama, Sonic is shown willing to do anything, even trading his own humanity, to defeat him by becoming a monster through the consumption of a Monster Cell provided by Gale Wind and Hellfire Flame.[10]

Sonic also respects Saitama for fighting monsters and even promised to himself to never fight Saitama while the hero is fighting monsters. He holds a very negative view of the Hero Association and some S-class heroes after observing how they treat a powerful hero like Saitama like a low-ranked and worthless hero because of his looks. Ironically, he is also rather judgmental as he assumes Tatsumaki exploits her childish cuteness and that those with benign appearances are weaker than himself, displayed in his fight against Saitama and Kamikaze.[11]

In his youth, Sonic was a very passionate boy who strove for a better life and did not allow the torturous training of the Ninja Village to turn him into a machine. He wanted to become the highest-ranking officer of the Ninja Village to change the institution and allow the trainees to live more freely.[12] He expressed the idea that the thing with true value is the idea to live one's life freely and hoped Flash would assist him with his dreams.

Sonic's disdain for heroes appears to stem from an incident at the Village nine years ago, when Blast arrived to eliminate the hidden sect, massacring all of the Class 5 ninjas regardless of their age. Sonic was able to escape thanks to being the strongest in the group, although the experience was rather traumatizing as it changed his perception of the world and heroes.[13] He believes that the moniker of "hero" isn't really suited for anyone, feeling none are worthy of such a lofty title. Furthermore, Sonic feels what the hero industry does isn't at all different from what the assassination business of the Ninja Village did, with heroes merely acting as though they do it for the greater good.

Greatly loathing individuals who think highly of themselves because they are more powerful, often touting it as incentive to be self-righteous jerks.[13] Going on to voice his general disgust and appallment at how the Hero Association and especially Neo Heroes methods make them more rotten than the criminal underworld when the latter recruited degenerates and the former tried to strike a deal with ne'er-do-wells and psychopaths as a means to an end.[14]

As a veteran ninja and assassin, Sonic is a master of ninja weaponry, possesses incredible amounts of speed, and is adept at hiding his presence. Fubuki commented that Sonic's fighting ability is that of an S-Class individual.[4] However, he is rather helpless against Dragon-level monsters, as seen in his fights with Gale Wind, Hellfire Flame, and Energiser.

As a child, he was revealed to have been rather weak in comparison to other ninjas, as he was always placed in the lowest class and was unable to advance to higher classes despite being given the harshest training in Class 5. However, Sonic revealed that like Flashy Flash, he only acted like he was weak in order to receive the harshest training.[15]

After his self-training, he appears to have found a more effective way to increase his power and was able to fight on-par with Flashy Flash, surprising the hero. What's even more astounding is that he was able to withstand one of Flashy Flash's ultimate moves: Flashy Kick. Additionally, while fighting alongside Flashy Flash, Sonic was strong enough to eliminate all 21 members of the Heavenly Ninja Party.

Immense Speed and Reflexes: Sonic's main power lies in his immense speed and reflexes. When confronting the Paradisers, he was capable of easily moving faster than they could react, decapitating every single member of the group apart from their leader Hammerhead, in only mere moments.[16] Sonic was also able to easily dodge all attacks from Deep Sea King, a Demon-level monster that could outmaneuver A-Class heroes effortlessly, only had difficulty when the monster entered its true form.[17] It has been stated by Murata that Sonic is faster than the S-Class hero Metal Bat.[18] During his fight with Genos, an S-Class hero, Sonic was capable of keeping up with the cyborg in combat, with both of their movements being so fast that Fubuki could not even see any of them.[19]

He could easily catch up to Tatsumaki during the fight between her and Saitama.[20] Additionally, he appears to have become significantly stronger and faster due to his fights with Saitama, as he was able to surprise Flashy Flash several times during their sparring match.

Enhanced Strength: Despite his thin build, Sonic is stronger than the average human. He was able to dislocate Base B's shoulder and incapacitate Special Moves Mile with no apparent effort.[21]

Enhanced Durability: Sonic's durability is greater than the average human's. He withstood Base B's shoulder and dislocated the prisoner's shoulder in turn.[21]

During his fight with Flashy Flash, his durability was shown to have significantly increased, and he was able to withstand Flashy Flash's Flashy Kick.

He also withstood Brawny Muscle's special punch, who can be considered the Heavenly Ninja Party's physically strongest member. He credited this durability to having experienced Saitama's attacks over a dozen times.

Ninjutsu Master: Sonic is a master of ninjutsu and has knowledge of various deadly techniques.

Smokescreen Shuriken (煙幕手裏剣, Enmaku shuriken): Shuriken that leave a trail of smoke. Sonic uses them to conceal his position.[32]

Culinary Skills: Sonic appears to possess some level of culinary skill, as shown when he cooks a monster cell as his fancy dinner.[33] 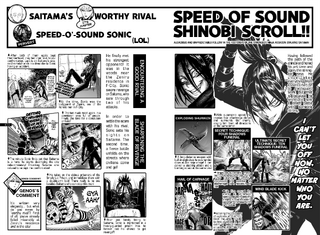 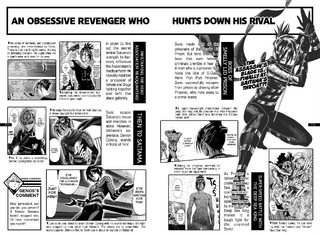 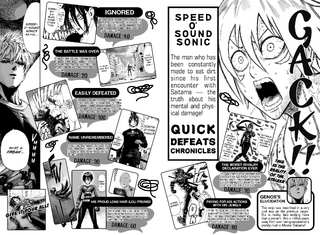