Sour Face (ニガムシ, Nigamushi) is a martial artist and the master of the Sourface Style Kenpo. He is also a former disciple of Bang.

Sour Face's most noticeable feature is his taut face, strained to the point where it appears that he has been eating foods that were too sour, and a cleft chin.

Sour Face was initially shown to be a rather large muscular man, but in later chapters appeared to be quite short.

During his stay in the hospital, he is shown to be incredibly short-sighted as he has to wear thick glasses to watch the news on TV. 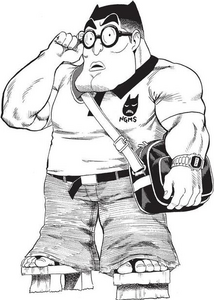 Sour Face enjoys denigrating Charanko for his lack of etiquette in practicing martial arts, from slacking off during training to entering the Super Fight tournament behind Bang's back, although in the latter case he was unaware that Saitama had entered under the then-injured Charanko's name. As one of Bang's former disciples, Sour Face holds his former master in high esteem.[2] He also nurses a grudge against Garou, who had rampaged across the dojo and severely injured him, forcing him to quit. He's also rather upset that he left the dojo, for while he created his own fighting style, he states he would've been Bang's number one disciple if he hadn't left. However, he still fears Garou: Saitama emphasizes that Sour Face had left Bang's dojo after the incident and entered the Super Fight to "pretend to fight" Garou, whereas Charanko had challenged Garou alone and head on, albeit foolishly.

Sour Face is also very nervous in front of crowds.[3] After his fight with the equally nervous Giga Pro-Wrestling fighter Jakumen, Sour Face, who feared being embarrassed with defeat by his opponent, praises him abundantly after his victory. In part due to this nervousness, he becomes friendly with and strikes up an informal alliance with "Charanko" to survive the tournament, helping him fix the disguised Saitama's belt, and praising him for insulting Zakos after Zakos insulted both him and Bang. Upon realizing that "Charanko" was about to fight the horribly violent Bakuzan, Sour Face strongly cautions him about the lethality of his opponent's attacks. Sour Face is also a trusting individual as he still believes Saitama to be Charanko after his wig is knocked off.

Sour Face was once a disciple of Bang, referencing himself as the number two, but left after Garou rampaged through the dojo during a training day.[4] Sometime afterwards, he created the Sourface Style Kenpo and started his own dojo.

Sour Face is participating in the Super Fight Tournament. He has a short discussion with Saitama (who is disguised as Charanko) about an incident that happened at the martial arts tournament in the past, when Garou decided to enter the tournament disguised as Wolfman, indirectly causing Saitama to become nervous by noting that the police will be called in if disguises are used during the tournament. He also states that he wishes to win the tournament so that he will never be intimidated if he ever faces Bang or Garou in the future and reminisces Garou's rampage through the dojo. Saitama outright states that what Sour Face is doing is pitiful, as he is simply using the tournament to pretend to fight Garou while Charanko had fought Garou head on by himself. Sour Face leaves the waiting room aggravated, directing a challenge at Saitama so that they might both fight in the ring.[5]

After the tournament introductions, Saitama converses with Sour Face when Zakos appears and starts questioning Saitama. Sour Face ends up answering some of Zakos questions. Zakos then reveals that Bang was supposed to be one of the judges, much to Sour Face's surprise, and starts mocking the martial arts master. Sour Face starts to feel very insulted, but felt even angrier when "Charanko" did not seem angry at Zakos' comments. Saitama replies that he was not invested in the conversation and is only looking forward to fighting Zakos, but notes that Zakos doesn't seem strong. Sour Face compliments Saitama's remarks.[6] Later, Sour Face explains to Saitama what a reverse seed is and shows him the tournament list, stating "Charanko" is a reverse seed too.[7]

While watching the match between Max and Suiryu, he is shocked by the latters strength, and how easily he defeats his opponent.[8] Later Sour Face is pitted against Jakumen in his first match with both men being visibly nervous.[9] He defeats Jakumen and both exchange praise after the match, with the commentators praising the sportsmanship between the two.[10] During the match between Saitama and Bakuzan, he watches the match with a nervous outlook since he expects a brutal blood bath. However, after Saitama upper-cuts Bakuzan into the air, he is deeply shocked at Saitama's power and the easy defeat of Bakuzan.[11]

During his match against Saitama, he proclaims that Saitama's victory against Bakuzan was sheer luck and promises to show him the true meaning of martial art powers. Ironically enough, he is ultimately defeated with the same uppercut and in the same manner as Bakuzan.[12]

In the match against Choze, he once again warns Saitama about Choze's brutality in his turn in the semi-final. However, once again he is met with disbelief when Saitama sends Choze flying in two seconds. As a result, he begins to lament the fact that Saitama is going to be champion.[13] During the final match between Saitama and Suiryu, he wonders what they are talking about and assumes it is about their harsh path to the finals.[14] He is amazed that Saitama could keep up with Suiryu, until Sneck and Max show up and point out Suiryu's fighting style.[15] After Saitama's wig is blown off, Sour Face is still convinced it is Charanko and believes Charanko had a problem with baldness.[16]

Sour Face is later present at the closing ceremony when it is suddenly interrupted by The Three Crows and Gouketsu, who tells them they will become monsters.[17] Sour Face and the other martial artist are given a choice to become a monster or die; visibly frightened he is shocked to see some of the fighters accepting the offer.[18] He later watches Suiryu fight the transformed martial artists and is saved from Choze's energy ball attack.[19] When Suiryu considers becoming a monster, Sour Face frighteningly watches, but is relieved that it was never his intention and cheers for Suiryu.[20] Sour Face is then knocked out by the crows, along with the rest of the martial artists.[21]

Sour Face is seen recovering in a hospital with Zakos and Lin Lin as they watch the news about the Monster Association.[22] He later agrees to join the two and head to Z-City during the crisis, but is convinced to stay behind by Suiryu.[23]

Sour Face rejects King's application into his dojo as he is afraid King's so-called "overwhelming power" will trash his dojo.

Sour Face cites himself as the second most powerful Bang's disciple after Garou, who implicitly confirmed his skill by approaching him to voice his intent to rampage in the dojo.[4][24] Furthermore, although Bang had claimed that all his best disciples beaten by Garou were crippled for life, Sour Face, who was among those disciples who suffered injury at Garou's hands, does not seem to be debilitated by his past injuries.[25]

Skilled Martial Artist: Sour Face claims himself to be Bang's second most powerful disciple, it can be assumed that he is a skilled martial artist. He was also capable of beating Jakumen.