The Sky King was a humanoid bird-like being with the appearance of an aging but muscular old man. He had long hair, a large nose, wrinkled forehead, sharp teeth, and pointed ears. He had two sets of wings on his back as well as talons on his feet and clawed fingers. He also wore a small crown. His overall appearance is reminiscent of the Tengu, a creature of Japanese folklore.[2] 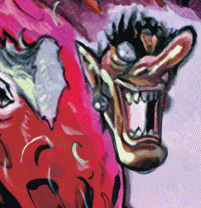 The Sky King appeared to be confident and rather arrogant. Due to his belief that he could destroy the Hero Association with ease and his extreme confidence in his subordinates' strength, he coveted possession of Earth's surface.

After observing the death of the Deep Sea King and the Subterranean King, the Sky King sees the chance to take control of the world with his four underlings: Hawk, Kite, Eagle, and Falcon.[3] However, an unseen enemy swiftly kills all his subordinates. Before he can react, Melzargard kills him.[4]

The Sky King's strength was roughly equivalent to the Deep Sea King and the Subterranean King, which classifies him as a Demon-level threat.[5] His attacks were able to send tremors throughout the Hero Association headquarters. Along with his own powers, he had a group of underlings that obeyed his every command.[6]

Flight: The Sky King's wings allowed him to fly.

Energy Projection: The Sky King was able to shoot energy blasts from his mouth. His energy blasts were strong enough to send tremors through the Hero Association headquarters.[7]