Chapter 95
Shadow Ring (シャドーリング, Shadōringu) is the A-Class Rank 32 professional hero of the Hero Association. She is also a ninja.

Shadow Ring's attire consists of a purple ninja garb that completely covers her face and body.[1] Underneath her garb, she has dark hair in pigtails. She also sports an eyemask.[2] 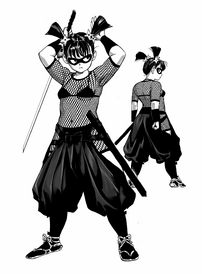 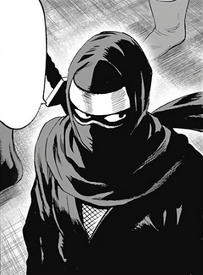 Shadow Ring appears to have a very reserved personality. She was visibly stunned by Flashy Flash's speed and admired his ninjutsu skills.[3]

Shadow Ring learned ninjutsu at an unknown location. It was not the same location that Flashy Flash trained at.[4]

Shadow Ring is one of the heroes recruited to the Monster Association raid's support team.[5]

When the monsters ambush the heroes, she battles them alongside her fellow heroes. She mows down several monsters with her shurikens. A monster comes up from behind her and slices her head straight down the middle, but it's revealed to be a trap, where the real Shadow Ring then slices the monster's head clean off. She sighs in relief, when Flashy Flash compliments her movements, asking her in what village she trained. Shadow Ring replies that it wasn't the same as the S-Class hero's, and runs back into battle.[6]

After Rhino Wrestler is defeated and Atomic Samurai eliminates a large horde of monsters, Flashy Flash decides to kill a large group of them. Shadow Ring witnesses this and marvels at his amazing speed, noting she couldn't see him at all.[9]

The hero support group fights off the remaining Monster Association forces on the surface as they escort Waganma to safety. Suddenly, Nyan appears and attacks the group, incapacitating several of the heroes.[10] The remaining heroes prepare to fight the monster. Green and Strange Binding Shell restrain the feline man, and Shadow Ring and Feather try to take advantage of its apparent immobility and attack it with their clawed weapons. However, Nyan slips out of the bonds and swiftly defeats the two heroes.[11]

As an A-Class hero, Shadow Ring is a skilled and powerful fighter. She is complimented by Flashy Flash for her combat skills. However, her reflexes couldn't keep up with the S-Class's speed at all. Moreover, she is outmatched when against Demon-level monsters, as seen in her fight against Rhino Wrestler.

Enhanced Strength: Being an A-Class hero, Shadow Ring has rather impressive physical strength and is able to dispatch several monsters with ease.

Enhanced Speed and Reflexes: As a ninja, Shadow Ring is naturally fast, as she was able to react to a monster striking from behind her, replacing her head with a wooden plank and slicing off the monster's own head in an instant.

Ninjutsu: Trained in a ninja village, Shadow Ring has demonstrated that she is proficient at ninjutsu.[12]

When the topic of paraphernalia was brought up, she claimed to be fully prepared for battle.[14] Being a ninja, Shadow Ring presumably carries around stereotypical ninja weapons such as a sword, shuriken, kunai and more.

Ninjatō: Shadow Ring uses a ninjatō, a sword with a straight blade, black square guard and a black hilt.

Tekko-kagi: Shadow Ring uses a pair of tekko-kagi, a claw-like weapon in each hand.