Squadron
Scaledon (ウロコドン, Urokodon, Viz: Urokodon) was a Mysterious Being that escaped from the Hero Association's facility. It was killed by Saitama.[3]

Scaledon is officially described as being 164 cm tall and weighing 100 kg, however this was back when he was captured as a Wolf-level threat, and after mutating his body grew exponentially.

His final form somewhat resembled several animals such as an armadillo, a pangolin, and dinosaurs like Nodosaurus. 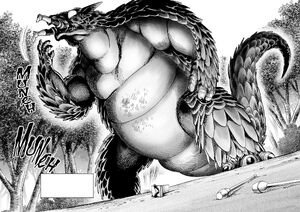 Scaledon had been captured for study and exploitation by Metal Knight then handed to the former coordinator of the Z-City Hero Asociation Branch, Guiches, who intended to sell its scales to a collector of monsters. However, the creature's new feeding habits while in its sheltered environment caused it to mutate into a more vicious form, breaking free from containment and eventually escaping into the forest which divides Cities Z and Y.

When it is made apparent that a shift in environment and diet caused an alarming growth spurt, information of which is withheld, a group of B ranked heroes; pertaining to which is Saitama, are sent out to dispatch it without harming the creature. When the hero group, minus Saitama, catches up to the beast he is already caught within numerous snares set up by one of their number Trap Tengu, all obstructions of which prove ineffective as the monster easily rips through them all. It dispatches all the heroes who confront it head-on and eventually devours them one by one.

Saitama eventually catches up to it just after it finishes the last hero of the team, as the former demands the monster to spit them back out as he wants to quit the team in front of their faces given that they belittled him and left him behind while out on the hunt. Scaledon instead opts to eat him whole, reuniting Saitama with the rest of the unconscious crew. Seeing as taking it in alive is no longer feasible, the hero quickly blows a hole out of its back, freeing both himself and whatever else Scaledon has consumed along the way, killing it instantly.

As a Demon-level threat, Scaledon was very powerful. He was able to easily overpower B-Class heroes.

Immense Strength: Scaledon was strong enough to easily outmuscle and eat a team of B class heroes, rip apart steel nets and tear down trees.

Prehensile Tail: Scaledon could use his tail as if it were just another arm.