Edit
watch 02:01
Hero Spotlight: Mumen Rider
Do you like this video?
Play Sound

Satoru (サトル), better known by his hero alias Mumen Rider (無免ライダー, Mumen Raidā), is the C-Class Rank 1 professional hero of the Hero Association. He is one of the few people aware of Saitama's strength.

After being offered an opportunity to become a stronger and more effective hero, he joins the Neo Heroes.[2]

Satoru is a young man of average height and weight. He wears an armored suit, with brown armor covering his torso and shoulders. He has a black leather suit under the armor and black gauntlets and knee pads. He also has a green bicycle helmet and dark-shaded goggles. Underneath his helmet and shades, he has short, brown hair and oval-shaped glasses that obscure his eyes.

Satoru is an extremely brave, loyal, and honorable hero who refuses to overlook any crime, no matter how minor or insignificant it may be or back down from any fight, no matter the opponent. He is incredibly determined and never backs down, even at the cost of his own life. He is perfectly willing to give his own life if it means protecting innocent people from evil, even when it is clear he has absolutely no chance of success.

He seems aware that he is weak compared to other heroes, and doesn't feel that he is worthy to move up in class because of it, but he is still more than willing to take on opponents for which the Hero Association sends out for A-Class heroes or above, if only to buy the stronger heroes time to arrive. This shows his selfless concept of self-sacrifice, and how he is willing to go the extra mile, as seen when other C-Class heroes were seen running away from the Deep Sea King.

He is very passionate about justice. He is shown to greatly respect people who save him, as seen when he mails Saitama a letter that he initially tries to compose, but quickly crosses out and finishes with a quick "Thank you!!", afterward asking the owner at the oden bar he was eating at to give Saitama his best serving. Similarly to Saitama, Mumen's heroic deeds are very pure, especially having some sympathy towards villains who seem to have a human heart left in them and appear to be misguided towards a wrong path, such as Bang's former disciple, Garou.

Even though he has been insulted by the Tank Topper Army and several other higher ranking heroes, Mumen doesn't mind. He is also perceptive enough to see what Saitama's true abilities actually are during their first encounter.

He has high expectations of heroes and does not believe they should commit dishonorable deeds. An example of this belief is when he's talking to Charanko in the hospital; when telling Charanko about Saitama and learning of Saitama going to the Super Fight Tournament, he assures Charanko that Saitama would never break the rules to enter in Charanko's place since he is a hero.[3] This could be interpreted as naivety for believing that no heroes can commit selfish deeds.

In many ways, Satoru can be seen as a foil to Saitama; Satoru outwardly has very little of the perceived strength required to be a superhero, and yet he has the immense drive and willpower to be one, while Saitama has all the strength he could need to be a hero, but none of the enthusiasm that Satoru has.

Being the top-ranked C-Class hero Satoru is eligible to be promoted to the B-Class. However, he has refused a promotion because of his belief that he is not strong enough to be a B-Class hero,[4] and has managed to retain his place at the top of the C-Class for more than half a year.[5]

Enhanced Endurance: Despite his injuries and the apparent pain he suffered, Satoru still continued to fight the Deep Sea King, showing a decent amount of endurance.[7] Even after being hospitalized by Garou, he is still seen battling the invading monsters at the hospital despite his injuries.[8]

Enhanced Durability: Satoru withstood an attack from the Deep Sea King, although he was heavily wounded.[9] Satoru also survived having his head smashed into the ground multiple times by Garou.[10] He also took a hit from one of Hammerhead's crew, which caused severe blood loss of his head, but luckily survived.[11] It should be noted that those battle suits can send a car flying with ease.[12]

Hand-to-Hand Combatant: Not much of Satoru's fighting skills have been seen since he's usually defeated before being able to harm his enemies in any way. However, before being smashed to the ground and judging by his outfit, it seems that Satoru prefers hand-to-hand combat and relies on his speed.[13]

Bicycle of Justice: Nicknamed "Justice" (ジャスティス号, Jasutisu-gō) In short, this is Satoru's mode of transportation. Appearing as a rather standard utility bicycle (also known as mama-chari), it has a thick frame, a light attached to the front fender, and a basket attached to the handlebars. Satoru seems rather adept at riding his bike, able to ride at high speeds even in rain.

Justice Helmet: (ジャスティスヘルメット, Jasutisuherumetto): A helmet that protects Satoru's head. He purchased it at the neighborhood DIY store.[1]

Justice Goggles: (ジャスティスゴーグル, Jasutisugōguru): A pair of goggles that protect Satoru's eyes. He purchased it at a local sports shop.[1]

Justice Suit: (ジャスティススーツ, Jasutisusūtsu): A body armor that protects Satoru's body. He created it himself after three days of no sleep.[1]

Justice Belt: (ジャスティスベルト, Jasutisuberuto): A commercially available belt that Satoru remodeled himself. It has no transformative properties despite its appearance.[1]

Flip Phone: Satoru carries a flip phone.[15] He has dropped the phone while on his way to the Deep Sea King's whereabouts, the Evacuation Shelter, and later Saitama picked it up.[16]

Battle Suit: Satoru is eventually approached by Accel, who urges him to retire but offers him a custom-made battle suit should he choose to continue fighting, which he decides to use. This suit tremendously enhances Satoru's power, with him now being able to defeat one Demon level threat in a single blow.

Indomitable Will: Similarly to Saitama, Satoru possesses a lot of sheer willpower. This is most evident in his fight with the Deep Sea King, where he did not stop going all out at the monster despite being brutally thrashed, critically injured and brought near death. 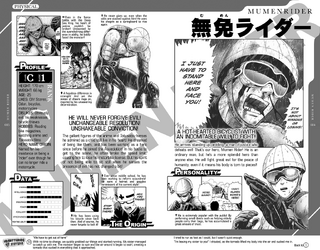 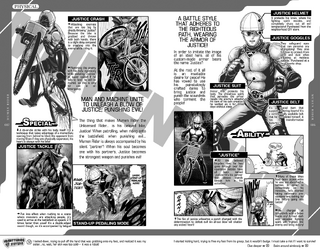