Episode 1
Saitama's Apartment (サイタマのアパート, Saitama no apāto) was the primary residence of Saitama and Genos. The apartment was also a meeting spot for the Saitama Group. Fubuki also made it an office of the Blizzard Group without Saitama's acknowledgment. It was destroyed by Tatsumaki.[1]

During the Hero Association's raid on the Monster Association, Tatsumaki lifts the entire base out of the ground, destroying Saitama's apartment in the process.[2]

This was the apartment Saitama has lived after getting kicked out of the Crappy Apartment Building, where he used to live in during his hero training before he lost his hair and became an incredibly strong hero.[3]

Saitama initially lived by himself in the apartment building before Genos moved in.[4] The apartment resides in the middle of Z-City's ghost town, therefore Saitama is the only resident there.[5] He moved in because it was abandoned, therefore he did not have to pay rent. The apartment is small with a large living space, a small kitchen, and a bathroom. Genos pays rent money to Saitama to live there. 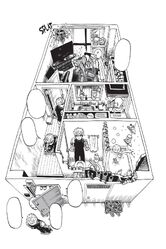 The interior of the apartment

The house is attacked by the House of Evolution, and Kamakyuri breaks the roof of the house. It was presumably later repaired by Genos.[6]

Fubuki, Eyelashes and Mountain Ape enter the ghost town and approach Saitama's Apartment to enlist Saitama into the Fubuki Group. Saitama rejects the 'offer' and is attacked. During Saitama's battle with Fubuki, Genos and Sonic arrive during their own battle. The result causes upheavals in the ground and burn-marks on the building, much to Saitama's chagrin. These damages are later undone, probably by Genos considering the Z-City Ghost Town is abandoned by all except for the two.

All members of the Saitama Group share hotpot with Saitama in his apartment. However, they enrage Saitama by eating most of it without him. Most, including Saitama himself, leave to aid in the battle against the Monster Association. Bang, Bomb, Fubuki and Genos initially stay behind and wait, but they end up leaving to aid in the battle as well. Genos eventually leaves last after realizing that Saitama had likely already joined the battle and that it was pointless waiting for him to return.

After having his house destroyed at the hands of Tatsumaki, Saitama moves to the newly-established Hero Apartments in Room 104 that is located within A-City.