Sage Centipede (ムカデ仙人, Mukade Sen'nin; Viz: Centisennin) is an immensely large centipede-like Mysterious Being. He claims to have emerged to destroy the "abominable fist" that opposes "God". He was killed by Garou.

Sage Centipede is a massive centipede-like monster, surpassing even Elder Centipede who was already one of the largest monsters seen. While he does bear some resemblance to Elder Centipede, he is notably more monstrous to a degree, having a sharper and spiky armor that sticks out. His humanoid head resembles a skull and has 5 glowing eyes while the centipede face holds 8. His mandibles are also more massive while his antennas are wider and thicker. According to Sage Centipede himself, his limbs are 6666 in total, and look like twisted humanoid arms with claws and armor on them.[1]

Sage Centipede's length is so long that he could extend from ground to space.[2] 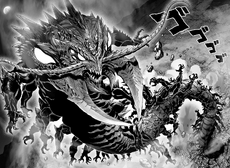 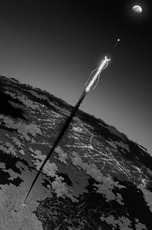 Sage Centipede portrays himself as a single-minded being, bent on achieving the singular goal of destroying the "abominable fist" that opposes "God". As such, he boasts of his superiority in the face of humanity, thinking of humans as "insolent and tiny". Extremely aggressive and powerful, Sage Centipede threatened to execute "divine retribution and destruction" for the sake of the Earth, whom he acknowledges as "father", as well as proclaiming the planet's oceans as "mother".[1]

During his fight with Garou and Metal Bat, Sage Centipede displays his cowardly nature on more than one occasion by taking a helicopter hostage, which has Tareo and some heroes inside, and demands them to stop moving in order for the giant monster to attack them directly.

Sage Centipede takes damage from Garou's attack. However he quickly regenerates, and despite Garou's attempts to grab his attention, Sage Centipede realizes Garou seemed concerned about the rescue helicopter (which Tareo is inside) behind it. He tells Garou if he moves an inch, Evil Ocean Water will shoot down the helicopter instantly. While Garou is surprised, Sage Centipede attacks the Hero Hunter with his Centipede Grand March, with Evil Ocean Water aiding him by shooting a devastating water cannon at him, severely injuring the Human Monster.

Despite the successful attack though, Sage Centipede notices unknown movement from Saitama who dashes towards and punches Evil Ocean Water, shocking Sage Centipede at the immense damage done and pondering if Evil Ocean Water's supposed death was caused by a tectonic shift. As the rescue helicopter in the sky seems to bother Sage Centipede, he targets and attempts to strike down the flying object. At this moment, Metal Bat from nearby, jumps towards his humanoid face and strikes it with many direct swings, although Sage Centipede remains practically unharmed and simply tosses the S-Class hero away. Sage Centipede continues his attempts to strike down the rescue helicopter, but a reporter helicopter pops up right above him, much to his annoyance. Sage Centipede then strikes the reporter helicopter with one of his antennas. However, Metal Bat manages to appear in front of the helicopter and blocks the strike. Shortly after Garou, already recovered from the damage he sustained earlier, lands a barrage of attacks on Sage Centipede, which momentarily knock back the giant monster but do not cause any serious damage to him

After an argument between Garou and Metal Bat, they soon team up to defeat Sage Centipede. Despite the two of them attacking all across his body, Sage Centipede still shrugs off their assault thanks to his toughness plus with his excellent regenerative abilities. While the monster considers Garou a threat, he does not think the same for Metal Bat and while thinking of using the hero as a hostage, seeing them argue makes him change his mind. He continues to pursue the helicopter, which Tareo and the wounded heroes are inside, in an attempt to take the plane hostage. When the monster comes very close, One Shotter shoots him in the head but misses. Sage Centipede eventually catches the helicopter with his antennas, shattering the rotor and taking the people inside hostages. At this moment, Garou and Metal Bat both stop dead in their tracks, which prompts Sage Centipede to attack the two with his Centipede Grand March, causing the entire terrain to change shape and seemingly taking down them. Sage Centipede then grabs an injured Garou, who is on his knees, with one of his human arms.

Just as Sage Centipede is about to finish off the Human Monster, One Shotter, now able to aim accurately thanks to having support from Gearsper, shoots the monster multiple times at his eyes, momentarily distracting him and allowing Garou to pry open the hold and escape. Immediately after, Garou pummels Sage Centipede and attempts to free the helicopter from the monster's antennas. Sage Centipede soon tries to attack Garou with his mandibles but Metal Bat appears and chops off Sage Centipede's antennas, much to his surprise. While he is surprised that the S-Class hero managed to keep fighting despite his deep injuries, Metal Bat informs Garou of a huge net 500 meters away which the latter then throws the helicopter to said place, moving it to safety, much to Sage Centipede's infuriate for having lost his hostages.

Despite having lost the hostages, Sage Centipede remains confident in confronting Metal Bat and Garou, declaring that even with their team-up, they still cannot win against the monster's 6666 legs working in tandem. He proceeds to lunge towards the two with his 6666 Leg Grand Drill, a powerful attack that resembles a drill and utilizes all of his limbs in tandem. In response, Garou and Metal Bat, working in-tandem, use their strong techniques respectively, Cross Fang Dragon Slayer Fist and Savage Hurricane, accidentally creating a combo attack against the giant monster, successfully countering his rush and even cracking his durable shell, much to its shock.

Thanks to the power ups he has received from Garou due to their "resonance", Metal Bat continues to strike Sage Centipede and is now able to break his durable exoskeleton with every single swing, causing the monster become furious and batter him away. At this time, Garou, whose strength has also been amplified greatly due to him "resonating" with Metal Bat, blows a massive hole inside Sage Centipede from front to back. Screaming, Sage Centipede realizes for some reason he can no longer regenerate. Garou then explains to it that what he did was taking away Sage Centipede's regeneration core. The "organ" in question being eerily similar to another monster Garou has faced. Despite the heavy damage, Sage Centipede attempts to take back his core, only for Garou to throw it out the planet.

Sage Centipede instantly pursues the core and eventually catches it with his antennas, exposing his immense length as it extends all the way from ground to space. Before Sage Centipede could place the core back within himself, Garou, having run across his back, leaps up at the organ core and by simply jumping down while using it as a stepping stone, destroys the core while heading towards Sage Centipede himself. No longer able to regenerate, the great centipede finally meets his end as the Human Monster splits him in half all the way down to the surface.

Sage Centipede is a gargantuanly huge Mysterious Being, being superior in size and strength to his underling Elder Centipede, who was himself an extremely large and powerful Dragon-level threat. He was able to fight against an evolved Garou and Metal Bat simultaneously, the latter being a powerful S-Class hero while the former being strong enough to have defeated multiple S-Class heroes as well as Dragon-level Mysterious Beings, defeating the hero and giving the Human Monster some difficulty before ultimately losing to him.

Immense Strength: Sage Centipede is extremely large and boasts great strength, being one of the largest monsters to have existed. He was able to push his way through the remnants of the Monster Association Headquarters that Tatsumaki had reshaped into a city-sized spear, and with his mandibles, he could shear his way straight through the gigantic weapon after lifting it out of the crater that Tatsumaki had made with it.[1] Through sheer movements, Sage Centipede was able to cause the terrain to change shape.[4]

Immense Durability: Sage Centipede possesses incredible toughness. His humanoid face alone was capable of withstanding blows from an evolved Garou, albeit with damage,[1] and even shrugged off many of Metal Bat's swings, which caused visible damage to Elder Centipede's humanoid face.[5]

Immense Speed: Despite his gargantuan size, Sage Centipede is able to move very fast. He is capable of spinning at extreme speed that turns his own gigantic body into a drill.[4] Furthermore, when Garou threw his regeneration core out of the planet at high-speed, Sage Centipede immediately chased after and soon managed to catch the core, having travelled all the way to space and crossing large distances within a very short period of time.[2]

Regeneration: Sage Centipede can regenerate extremely quick. Despite having taken damage from Garou's attacks, he regenerated many times. He was able to effortlessly recover from any damage caused by both Garou and Metal Bat, with the former even commenting Sage Centipede on his regenerative abilities, stating that if he is not destroyed from the head to tail at the same time, he can just keep regenerating. However; Sage Centipede has a regeneration core inside his body that once taken away, disables his ability to regenerate and leaves him vulnerable.