Royal Ripper is a humanoid monster wrapped almost completely in bandages, having exposed only his right eye and his long dark disheveled hair. Over his wrappings, he wears a worn out tattered red dress and flat black shoes. Instead of hands, he has a pair of long and sharp straight blades that he sometimes uses to scratch the floor in a menacing manner. Royal Ripper's inside is nothing like that of a normal human, but a mixture of hair, blood, and gauze. 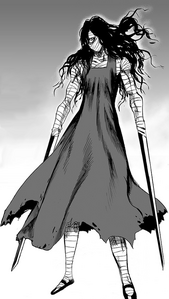 Royal Ripper is a sadistic monster with a very strong drive towards torture and killing. He is shown to get excited over cutting apart anything, enemies as well as allies. He experiences intense sadism towards children and Black Sperm was not surprised when Royal Ripper disappeared with Tareo, remarking that "He couldn't hold back his urges." Phoenix Man describes him as an "a one-of-a-kind psycho who kills for pleasure," so much so that even other monsters avoid going anywhere near him.[3]

He even states to Tareo that he doesn't care for the Monster Association, as his only goal in life is to slaughter other creatures.

He is very psychotic, yet childish, refering to his fellow monsters with honorifics in a rather playful manner. Although he enjoys toying with his opponents, he can easily be overwhelmed by his killing instincts as shown when he attacked a distracted Garou from behind and continued to viciously slash at him despite the latter already being down.[4]

He attempted to murder Narinki's Private Squad before Do-S stopped him. He and Bug God are sent by Gyoro Gyoro to follow Garou and investigate his actions.

Royal Ripper confronts the Hero Hunter when he questioned whether he was truly a monster. As proof of Garou being a monster, Royal Ripper demanded Garou to murder Tareo. However, Royal Ripper's urges for killing children soon take over, ultimately resulting in Royal Ripper and Bug God fighting Garou.

Royal Ripper takes Tareo to the Monster Association base and puts him in the same cell as Waganma. He tells the two to play nice, and momentarily leaves in order to regain his strength. He eventually returns to the cell, and chooses Tareo to torture for his pleasure. After threatening the boy, he decides to begin the torture, but is interrupted by Garou. Garou breaks through the wall and quickly kills Ripper by punching off his head and using the Whirlwind Iron Cutting Fist to rip his body apart. After his death, his bandages are used by Garou to wrap his wounds up.

Being a demon level threat, Royal Ripper is a rather powerful monster. In the webcomic, Royal Ripper, Bug God, and Senior Centipede managed to injure Bang and Bomb, two upper echelon martial artists, which is quite an impressive feat, although this was corrected in the manga, and Garou later said that Royal Ripper is nowhere near Bang's level. With the combined efforts of Bug God and Senior Centipede, the three managed to put Garou in a near-death state, although Royal Ripper and Bug God were injured, and Senior Centipede was killed during the battle. They also admit if they had fought Garou one-on-one, it would have been a difficult battle. That testament is later proven true, as he is killed in a single strike by Garou when he is prepared to torture Busaiku.

Immense Strength: Being a Demon-level mysterious being, he is very powerful, as he was able to slash apart multiple monsters with his blades, and along with Bug God, he was able to defeat Garou and put him in a near-death state.

Enhanced Senses: Royal Ripper is capable of smelling the presence of humans near him.[5]

Bone Reallocation: Royal Ripper has been shown to reallocate his joints and bones to have movement with more degrees of freedom. This allows him to move his blades more freely while making his blade arms less of an inconvenience.[6]

Expert Swordsman: Royal Ripper is extremely skilled with the blades that are in place of his hands. He makes multiple erratic slashes in combat.[7]

Retrieved from "https://onepunchman.fandom.com/wiki/Royal_Ripper?oldid=155731"
Community content is available under CC-BY-SA unless otherwise noted.