As his name suggests, Red Nose has a red nose. He also sports curly red hair, dull eyes, and a nonathletic build. He has apathetic eyes and constantly diagonal eyebrows. Red Nose is one of the shortest heroes, standing below most people whenever he is shown. He's also very portly, or fat. 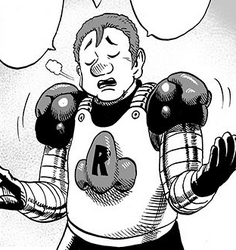 Red Nose is a rather selfish and attention-seeking individual, as seen when he kept looking at the camera and posing while trying to convince a man to refrain from committing suicide.[2] He is also pretty cowardly given how he'd run from a monster at first sight and yet is highly overconfident, seeing Garou's rising infamy after defeating Tanktop Master as an opportunity for promotion and underestimating the Hero hunter due to the latter being a human.[3]

Red Nose begins to belittle the heroes that had been defeated by the Garou but gets negative responses from Hyottoko and Studless. He goes on to attempt to show off his own martial arts skills only to have Garou himself appear behind him.[4] He and the heroes were later found beaten on the street.[5]

Red Nose is later shown to have joined the Hero Name Victims Association, displeased with the name given to him by the Hero Association.[6] He goes with the others to recruit Saitama at his apartment. He is present when the group protests outside the executive's meeting room as well. His "Desired Name" is Red Thunder.

Red Nose is trying to convince a Suicidal Man not to jump from a building, but in reality, he is just trying to look good on camera.[2]

Red Nose makes a cameo appearance when the Blizzard Group is talking about factions in the Hero Association.[7]

Like most C-Class heroes, Red Nose seems to prefer to combine strength against emergencies, rather than fight them alone, as he was seen most of the time with other C-Class heroes.

Given his rank in C-Class and how easily he was beaten by Garou, it can be assumed that Red Nose is a rather weak hero, even by C-Class standards.

Novice Martial Artist: When he spoke with Hyottoko and Studless about Garou, he claimed to know a bit about martial arts. Although he is clearly nowhere near Garou's level, who easily knocked him out.[8]

Red Nose wears armor with a nose on the chest with the letter "R" on it, with additional noses on each of his shoulders, which extends through the arms to reach his gloves. The armor is made by his mother. 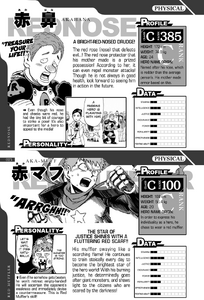