Puri-Puri Prisoner (ぷりぷりプリズナー, Puripuri Purizunā) is the S-Class Rank 17 professional hero of the Hero Association. He is the boss of the prisoners held in Smelly Lid Prison.[1]

Puri-Puri Prisoner is a very tall and large muscular man with a stubbly, cleft chin, large lips, and black bushy hair. He has a well-defined jawline and light blue eyes with long eyelashes. He wears a traditional prison jumpsuit with white and blue stripes. He used to wear a white sleeveless vest with a large pink heart in the center over his prison clothes, but he ripped it during one of his transformations.

Puri-Puri Prisoner is a flamboyant, openly homosexual superhero. He takes an interest in other good looking male heroes and criminals; an interest which led to his titular jail sentence, as he kept sexually assaulting them. Criminals that he apprehends are then added to his harem. He appears to be rather absent-minded, as he did not think to remove his sweater before bulking up, and then blamed his opponent, the Deep Sea King, for its destruction.

He also has a standard about true justice, protesting Sweet Mask's attitude on criticizing and mocking the hardships of the S-Class and A-Class heroes trying to risk their lives protecting A-City, and resisting an unexpected invasion from the Dark Matter Thieves, asking Sweet Mask on which side he truly is.

He also seems to take pride in his position, as part of the reason he wanted to defeat the Deep Sea King was because Genos had surpassed him in rank and he wanted to prove his worth as an S-Class hero.

As the lowest-ranked hero in the S-Class, he seems to be more down to earth and genuinely heroic than some of the more self-absorbed heroes in S-Class. Though he escaped prison to fight the Deep Sea King under the pretense that he had done it to prove his worth after being outranked by Genos, his internal dialogue at the time also indicated that he did it because he didn't want to see any more heroes get hurt. He also seems relatively kind and very polite, demonstrated when he took the time to inform Saitama about the late seer Shibabawa during an S-Class hero meeting about the prophecy, whereas many of the other S-Class heroes automatically dismiss Saitama as not worthy to speak to them, due to his lower rank. He also showed humility and maturity following his defeat by the Deep Sea King, not being above taking the creature's advice about combos to heart in order to develop a new technique. Later, when Sweet Mask berates the S-Class heroes for A-City's destruction, Puri-Puri Prisoner refrained from being argumentative and instead tried to defuse the situation, showing that despite his flamboyant antics, he is capable of demonstrating calmness, reason and tact in serious situations.

Immense Strength: Puri-Puri Prisoner possesses immense physical strength, as seen when he easily breaks through the thick steel walls of the Smelly Lid Prison, which prompted Sonic to remark that he was even stronger than Hammerhead was in the battle suit, although this was without him seeing Hammerhead use the full power of the battle suit against Saitama.[3] He was able to defeat the Demon-level Free Hugger merely by hugging it with excessive force. Having become stronger, he also defeated a monster as powerful as the Deep Sea King by using the killing technique he learned from him.[4] During his battle against Baquma, a Demon-level monster that absorbed the power of other monsters in its vicinity, Puri-Puri Prisoner was able to easily obliterate the monster with his Vibrating Dark Angel Rush technique.[5] His punches are heavier than rocks and harder than iron.[1]

Immense Speed: Puri-Puri Prisoner is able to run at great speeds. With his technique Angel ☆ Dash, he was able to outrun the Dark Matter Thieves' crashing ship.[6]

Immense Durability: Puri-Puri Prisoner possesses amazing toughness and is much more durable than average heroes. He was able to endure some strikes from Deep Sea King, a powerful Demon-level monster, only going down later in the fight.[7] After getting stronger, his durability was notably increased as he easily withstood a blow from a monster as strong as the Deep Sea King.[8][4] His skin was also stated to be so tough that even razor blades could not penetrate.[9] He was capable of withstanding an onslaught from many of his fellow prisoners that turned into Mysterious Beings while sustaining little to no damage whatsoever.[10] Additionally, Puri-Puri Prisoner was durable enough to survive attacks from Dragon-level threats such as Nyan,[11] and Garou, though he was seriously injured.[12]

Pain Suppression: Puri-Puri Prisoner is able to suppress pain. He endured the pain from killing the Demon-level threat Free Hugger, a massive hedgehog-like Mysterious Being with a large amount of spikes covering its entire body, by hugging the monster despite getting multiple cuts and injuries in the process.[13] From this, Puri-Puri Prisoner learned to accept pain as another kind of overflowing love and he referred to his ability to suppress pain as Angel ☆ Hug.[14] He was also able to repress the pain caused by Nyan's scratches, regardless of a large amount of blood loss from the injury.[15]

Healing Factor: Puri-Puri-Prisoner heals at an incredible rate, compared to normal humans. He recovered from his heavy injuries, which he received in his fight against Deep Sea King, in just a matter of days by resting. When slashed across the chest by Nyan, a powerful Dragon-level Mysterious Being, Puri-Puri Prisoner was able to fully recover from the wound in a matter of moments, only leaving behind 3 long scars.[16] Furthermore, he was also shown to recover from his severe injuries, which he received from Garou when the latter was awakened by him, in a short period of time.[17]

Accelerated Growth Rate: While not at the level of people like Garou, Puri-Puri-Prisoner showcases the capability to grow in strength and overall physical prowess at a rate much faster than normal humans can hope to achieve. While at the start of the series, he was defeated with only slight effort at the hands of the Deep Sea King, a Demon-level (albeit a particularly powerful one) Mysterious Being, since his training, he has grown much stronger than he was before. Most notably, he was able to defeat a monster as strong as the Deep Sea King without much effort, and he also later withstood multiple attacks from Dragon-Level monsters, albeit with heavy damage. 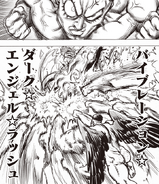 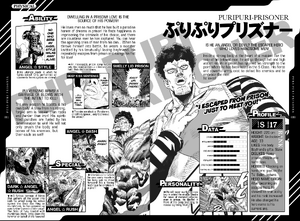