One-Punch Man Wiki
Register
Don't have an account?
Sign In
Advertisement
in: Articles in need of citations, Characters, Female,
and 9 more
English

Edit
watch 01:07
Monster Spotlight: Psykos
Do you like this video?
Play Sound

This article is about the character. For the chapter, see Chapter 126.

Psykos's meat puppet Gyoro Gyoro appears as an obese slug-like monster with a single eye, with no visible facial orifice and eight arms protruding through it's head. It has four main arms, two stubby legs and three toes on each foot.

During high school, Psykos had braces, which made her mouth puckered. She also wore larger and rounder glasses and had freckles.[4] 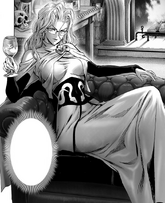 Psykos's appearance in the manga 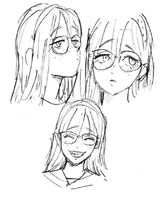 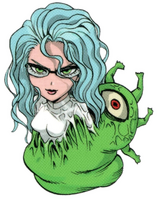 Equally as manipulative as she is cunning, Psykos also often schemes and plots around the other members of the Monster Association geared towards experimental needs.[5] She played Rhino Wrestler for a fool by sending the lower-level monster against opponents he had no hope against during the heroes' invasion for scientific curiosity.[6] Psykos is also quite arrogant, sadistic, and volatile.

She is also very mischievous, as she enjoys playing sadistic games with the Hero Association staff.[7] Being very calculating, she takes into consideration the compatibility of each battle.[8]

Although Psykos is highly intelligent, she has a superiority complex. Her confidence on being a powerful esper along with the fact that she is later even granted additional power by the supposed "God", causes her to belittle Tatsumaki and believe herself able to become the "ultimate lifeform."[9]

Before succumbing to madness by the future she had foreseen, she used to be a clumsy person and showed great respect toward her former friend, Fubuki.

She is ambitious, continuously working to expand Fubuki's influence in her youth and the power of the Monster Association in the present day.[citation needed]

However, at the same time, she is merciless to her subordinates who fail to match her expectations with very few to no real exceptions.

She also carries an incredibly dim view of humans, despite being one herself, stating in derogatory terms that they only take up space and accomplish naught but squandering everything they get their hands on.[10] This is where the respect she harbored for Fubuki was shattered after her mentor crippled her powers. Despite this resentment for her former superior, she still withholds some underlying longing for her fellow esper's acknowledgment.

One of her overarching personality traits stems from her all-consuming hatred of humankind and all of their works, which came about when Psykos peered into the future of mankind.

As the second-highest-ranking member of the Monster Association, Psykos has great authority over almost everyone and oversees the organization's operations and activities, and as a Dragon-level threat, she is an extremely powerful being. She is shown to be very powerful as an Esper, but not very skilled. Garou has commented that she cannot perform more than one action at the same time when using telekinesis. After merging with Orochi, her psychic power increases exponentially, allowing her to contend with Tatsumaki and seriously harm the esper, although Tatsumaki reveals she was holding back because Tareo's safety wasn't secured.[11]

Psychokinesis: Psykos is a powerful esper. She can send out psychic signals to her colleagues from over great distances, as well as remotely control Gyoro Gyoro from 1500 meters underground.[12] When her power is amplified by her Elixir, Psykos can break free of Tatsumaki's restraints and drag her down from a large distance even as she is being dragged herself upwards.[13]

Expand to see original webcomic information. Beware of spoiler content.
Her psychic output surpasses Fubuki[14] but is inferior to Tatsumaki's. She was also able to immobilize Bang long enough for Homeless Emperor to attack him.[15]

Gravity Manipulation: While controlling Gyoro Gyoro, Psykos could manipulate gravity and use it to crush her enemies.

Spy Drones: Psykos created and could control several spy drones that are shaped in the image of Gyoro Gyoro and can communicate through them. These spy drones could possess wings to fly a great distance or be planted as stationary viewpoints like security cameras.

Telepathy (テレパシー, Terepashī): Psykos uses telepathy to communicate with others. She uses this, as Gyoro Gyoro, to tell Garou to wait while sorting out disputes among the monsters.[17]

Clairvoyance: Psykos has the ability to see into the future. This ability is called the "Third Eye."[18]

Monster Transformation Stimulation: Psykos claims that she can stimulate growth in humans and turn some of them into exceptionally powerful monsters, like in the case of Orochi. Gyoro Gyoro's method is unknown in detail, but it can be assumed to be similar to the phenomenon of abnormal cellular reactions that normally transform some humans into monsters, without the Monster Cell.

Keen Intellect: Psykos is a highly intelligent individual and has great authority over almost everyone and oversees the Monster Association's operations as well as its activities. She is able to analyze any individual's power and is the one responsible for evaluating the disaster level of the Monster Association's members. She was also able to measure Garou's exceptional potential after re-encountering him, unlike previous monsters who underestimated the Hero Hunter despite his feats.[19] Additionally, based on battle compatibility, she accurately predicted which the monsters that needed to be sent to face the heroes that could give her side one-sided fights and perfect victories, as shown when the S-Class heroes had severe trouble dealing with the executive members that they had encountered due to her correctly sending the heroes' worst possible match up to face them.[20]

However, she still has less experience and expertise than Fubuki and Tatsumaki, which is why she lost to Fubuki even though she had a greater psychic output.

After barely surviving his battle with Saitama, Orochi uses his absorption ability to regenerate his body. He absorbs his master Psykos; however, Psykos resists complete assimilation and the two merge into one huge red monster with many tentacles. During the fusion, they met and received additional power from a being they refer to as God.[22] They are strong enough to injure Tatsumaki and force her to get serious.[23] In this state, Psykos claims that in terms of power, she is already above Tatsumaki.[24] Their attacks also increase to devastating levels, creating tsunamis over a portion of the planet's hemisphere.[25]