Edit
watch 01:02
Hero Spotlight: Pig God
Do you like this video?
Play Sound

Pig God is a large, morbidly obese man with short black hair and big lips. He wears a long-sleeved black shirt, blue jeans, and a white shirt underneath with the word "DEV." Later on, he is seen with a different shirt that says "BUTA," which is Japanese for "PIG". 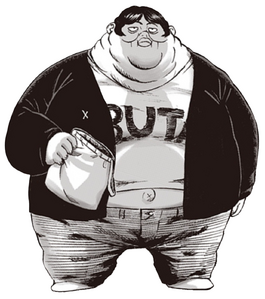 Pig God is a glutton and is constantly eating food. He is also very direct, or simply lazy, as he crashed through a building rather than go around it and speaks in a blunt fashion. However, he is shown to be a very caring individual. He displays a quiet, selfless attitude, and acts in a heroic fashion. He went out of his way to rush to Child Emperor's assistance even though he does not like to run. He was shocked to learn of Drive Knight's disappearance and voiced out that he really hopes Drive Knight is alright. Pig God also appears to be very humble, as he usually doesn't mind helping others or openly embracing other heroes' advices. He also does not mind paying for people in secret.[2]

Unlike many other heroes in the series, Pig God possesses a strong sense of duty, as he escaped his hospital to ensure that all monsters were defeated after the Monster Association incident despite still being heavily injured.

He is also rather concerned for the well-being of others, going out of his way to protect Atomic Samurai's disciples and later requesting that another hero be treated for his injuries before him.

As an S-Class hero, Pig God is very powerful. Like other heroes of that class, he is able to defeat a Disaster Level Demon Mysterious Being on his own, as he proved with his swift and effortless victory against Eyesight and The Great Food Tub. Although being unable to defeat Gums, a powerful Dragon-level threat and an executive member of the Monster Association, he did manage to hold his own against the monster for a short time without being instantly overpowered.

Inhuman Digestive System: Pig God has the ability to digest swallowed monsters almost instantly.[3] He also seems to have complete control over his digestive system, since, despite the strength of his gastric acid, he was able to store Atomic Samurai's three disciples and Narinki's private squad safely in his belly and spit them out unharmed.

He was also able to digest Evil Natural Water, though this liquid monster had already been weakened by Saitama's punch.

Fat: Pig God has a thick layer of fat capable of absorbing all types of impact. His many layers of fat made it so that not even Gums, a voracious Dragon-level monster whose bite force is capable of crushing heavy machinery, could bite through it.

Venom Immunity: Pig God was immune to Eyesight's venom as the immense amount of fat prevented the venom from getting to his blood vessels, and even when he consumed her, his body was not affected by the venom.[4]

Elastic Body: His body can expand greatly without tearing apart or bursting open. This allows Pig God to consume monsters much larger than himself. This is first seen when eating Eyesight, as he managed to stuff her into his mouth by stretching his lips very wide. This is again seen when he's in the process of consuming The Great Food Tub, a monster much larger than him. Pig God's body bulks up due to the monster's larger size without any visible signs of pain.

Immense Strength: Pig God was able to force Gums, a Dragon-level Mysterious Being, to spit him out after swallowing him. He also managed to briefly go toe-to-toe with the monster, but ultimately lost rather quickly.[5] His raw power is enough to grab large monsters and force them into his mouth. Furthermore, Pig God was also able to tackle Gums with enough force to make it spit out Tanktop Master several times, saving the latter from being crushed under the monster's incredibly powerful bite force.[6]

Immense Durability: Pig God's body is more resistant than normal due to the many layers of fat that protect his internal structure as Gums was unable to bite through it, although he still suffered heavy injuries.

Enhanced Speed: Despite his gargantuan weight, Pig God is quite fast. He was able to rescue Zombieman, Iaian and the Narinki's Private Squad from the collapsing Monster Association base in a relatively short time. He also moved quickly enough to cover Child Emperor from the falling rubble created by Tatsumaki during her battle with the fusion of Psykos and Orochi.[7] Additionally, Pig God was fast enough to react to Gums' surprise attack on him and Tanktop Master from underground, managing to quickly move himself and the fellow hero out of the monster's jaw.[8]

Enhanced Endurance: In spite of the severe injuries inflicted on him first by two disaster level Dragon opponents, Pig God kept fighting against the Monster Association and Garou, showing few to no signs of being in pain. After swallowing a weakened Evil Natural Water and being pierced from the inside multiple times (at least nine), he refused to go to the hospital and simply walked away, planning to eat a hamburger.

Hand-to-Hand Combatant: Pig God is an extremely unconventional fighter. He tries to end confrontations with one attack by swallowing the opponent whole, seemingly aiding himself with his hands to restrain them or lift them. He rarely uses any tactics other than consuming opponents, with the only time he actually used hand-to-hand combat being against Gums.

Hidden Power: By Pig God's own claim, he hosts some sort of secret power inside of himself.[9] It has never been specified what this power is, but given the fact that he chose not to use it even against multiple Dragon-level monsters, one could assume that this power is unbelievably strong, as he preferred to save it for the rumored God-level threat of Shibabawa's prophecy.

Backpack: Pig God sometimes carries a large backpack that he uses to carry food and eat it when he's hungry.[10]