Various One-Punch Man merchandise has been sold since the inception of the series. There is the release of the DVD for the anime series and a series of Audiobooks focusing on different characters. An encyclopedia, titled One-Punch Man: Hero Encyclopedia, has been released and translated into various languages. A behind-the-scenes book detailing the work of the One-Punch Man manga called ONEBUKURO 1 was released on December 30, 2013. Two more titled ONEBUKURO 2 and ONEBUKURO 3 were released on December 30, 2014 and August 16, 2015, respectively. The manga has currently released 20 volumes in Japanese and 17 volumes in English.

One-Punch Man has also collaborated with Lotte to produce a Crunky chocolate bar featuring characters from the One-Punch Man franchise.

A card game called Hacha Mecha was released on the 21 November 2015 card game.[2]

The tutorial of the card game can be found here (Video in Japanese).

The original soundtrack for the first season of One-Punch Man, titled One Take Man, was released on January 13, 2016.

The original soundtrack for the second season of One-Punch Man, titled One Take Man 2, was released on July 24, 2019. 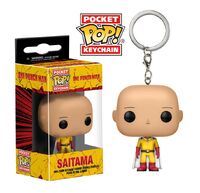 Retrieved from "https://onepunchman.fandom.com/wiki/One-Punch_Man_Merchandise?oldid=179074"
Community content is available under CC-BY-SA unless otherwise noted.