This article is about the video game. For the OVA, see OVA 0.

Like the first game, tells the story of the protagonist Saitama who becomes a hero. Also covering the story up until the Monster Association Arc/the second season of the anime. As before the update, it was only season 1 content. The new update gave us a new map. The old map will say here to record the history of the app.

The gameplay is used to move your characters around, getting them ready for battle. They will automatically fight for you, only pressing a few buttons for a special attack. You can level up characters, you can also get doubles of ones you already own. You can use this to combine characters into one, to level them up and make them stronger. 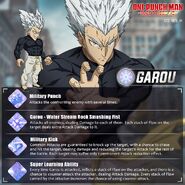 A new update featuring Garou and his moves.

The new map added with the new season 2 update!