The game tells the story of the protagonist Saitama who becomes a hero, losing his hair but gaining the greatest strength through strenuous workouts. Eventually, he joins the Hero Association with his disciple Genos and fights against various monsters, villains, and catastrophic events together with many other heroes. It covers the story up until the Alien Conquerors Arc, or the first season of the anime.

The gameplay is somewhat similar to Mob Psycho 100 Psychic Battle. A 3D turn base RPG game. 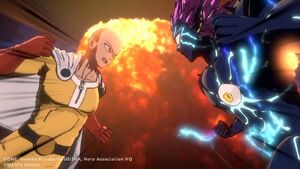