Episode 19
Okamaitachi (オカマイタチ, Okamaitachi) is the A-Class Rank 3 professional hero of the Hero Association and a disciple of Atomic Samurai.

Okamaitachi wears a long-sleeved sweater and a long dress. Her hair consists of two upward arches split at the neck with hairpins on each side of her head. She has a large dot on each cheek.

Okamaitachi was born male but sees herself as a maiden at heart.[1] Okamaitachi is good friends with Iaian and Bushidrill,[1] though her habit of falling for handsome male monsters annoys her teammates. This habit also extends to handsome men as well, seen when Okamaitachi admired Sweet Mask's looks. She also loves sushi very much.[1]

As a disciple of Kamikaze, Okamaitachi was recruited after an apple cutting test. As Kamikaze has the ability to tell how a person lived their life by cutting with a sword, he only recruits disciples if they pass his test. At some point in the past Okamaitachi, Iaian and Bushidrill fought Child Emperor and lost.

Okamaitachi, Iaian and Bushidrill are waiting outside discussing about Garou's hero hunt, while their master Atomic Samurai is attending a meeting with the Council of Swordmasters.[3] After Atomic Samurai killed the monster Haragiri, Atomic Samurai then declared they will strike the Monster Association.[4]

This section is missing and contains outdated information. You can help by updating it.

Okamaitachi, Iaian, Bushidrill and Atomic Samurai hunt through the mountain to look for the Monster Association's hideout and killed any monsters as they came across. They soon return to the Hero Association headquarters where they are informed of the Monster Association hideout in Z-City. Okamaitachi decides to leave to take a shower when Sweet mask shows up. While Okamaitachi was enamored with Sweet Mask, Sweet Mask quickly dismisses the inadequate members.[5]

Okamaitachi, Iaian and Bushidrill encounter Do-S and the mind controlled mercenaries. They do battle, but are interrupted by Sweet Mask. Sweet Mask calls for the swordsmen to leave the battle to him.[7] They leave and encounter.

The sword heroes continue to fight monsters and encounter Devil Long Hair. Okamaitachi becomes infatuated with him, much to her teammates annoyance. Bushidrill and Iaian tells Okamaitachi to snap out of it, reminding her that their role is to lighten their master's burden. Okamaitachi attacks with her Air Blade, but Devil Long Hair stops it with his hair, shocking the swordsmen. Devil Long Hair counterattacks, but Bushidrill manages to stop the attack before any harm was done. The Demon-level monster then extends his hair toward Iaian and Bushidrill, and the swordsmen prepare for battle.[8]

The three swordsmen work as a unit, rushing in and cutting Devil Long Hair's hair as fast and as effectively as possible, and manage to defeat him, although they admit it was a difficult opponent, and had they not worked together, they surely would have lost.[9] Later, Okamaitachi, Iaian, and Bushidrill are attacked by Evil Natural Water, a Dragon-level monster, who defeats all of them and badly injures them, knocking Okamaitachi and Bushidrill unconscious.

The three swordsmen are then swallowed up by Pig God, who found them and consumed them, and manages to bring all three of them up to the surface and regurgitate them without any noticeable injuries.

As a top-ranking A-Class hero, she is an extremely skilled and powerful fighter. According to Fubuki, Okamaitachi and her fellow teammates could've been S-Class if it wasn't for Sweet Mask's gatekeeping.

Immense Strength: Okamaitachi has very impressive strength. She is shown to be strong enough to swing her sword with enough force to create a giant blade of air, a feat even Bushidrill admires. She is also strong enough to damage the armor of two members of Narinki's Private Squad with her Air Blade, as well as cut through Devil Long Hair's very durable hair.

Immense Speed and Reflexes: Despite being outnumbered, Okamaitachi can dodge and counter attack Narinki's Private Squad in their full powered battle suits with only minor difficulty. Okamaitachi is also fast enough to react to Devil Long Hair's attacks, and fight back effectively.

Enhanced Senses: Okamaitachi can sense murderous intent around her, and can strike without needing to open her eyes.

Expert Swordsman: It should be noted that Okamaitachi is under the tutelage of the S-Class hero Atomic Samurai, and is seen wielding a sword. Okamaitachi is exceptionally proficient in swordsmanship.

Katana: Okamaitachi carries a katana with a curved, glossy hilt and a standard cross-guard. 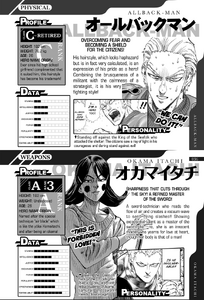