December 25, 2019
Genos and Memory Loss (ジェノスと記憶喪失, Jenosu to Kiokusōshitsu) is the ninth OVA of the One-Punch Man anime series.

As Genos and Saitama watch TV, Saitama accidentally knocks him out when trying to reach his potato chips and Genos wakes up with memory loss. Genos reads some manga left on the floor in Saitama's apartment, and picks up various character personalities. For example, one personality is childish, talking in a high-pitched voice. Another is a delinquent personality when Genos insults Saitama after discovering Saitama is his master. Later, Fubuki arrives at the apartment and learns that Genos has his memory loss from Saitama. The cyborg hero tries to flirt with her and asks her if she wants to go out with him, Fubuki rejects and takes her leave however. Afterward, upon detecting energy levels via his radar, Genos leaves the apartment and rushes towards something he just detected while expressing surprise as his body is moving by itself. He then faces the Blizzard Group, who wants to recruit him into becoming their comrade. Genos, having his memory loss, however, tries to convince them that they are mistaking him for someone else shortly before running away from them. 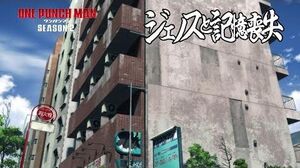