November 25, 2019
Going Fishing with Middle-aged Men (おっさん達と釣り, Ossan-Tachi to Tsuri) is the eighth OVA of the One-Punch Man anime series.

Atomic Samurai and Bang go out fishing to a lake. Giant Salamander attacks the lake and Chain'n'toad and Mumen Rider try to stop it but fail, and Chain'n'toad is eaten. They are then saved by Atomic Samurai who kills the monster. Kamikaze and Bang talk about how many young heroes these days don't live to the essence of a "hero", and Bang states the Hero Association and their ranking system is partly to blame. 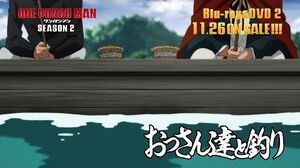