Saitama And The Mediocre Ability Users

Saitama And The Mediocre Ability Users

"Saitama And The Mediocre Ability Users" (サイタマとそこそこの能力者達, Saitama to Sokosoko no Nōryokushatachi) is the seventh OVA of the One-Punch Man anime series.

Saitama meets a group of villains in a public restroom who mistake him for their ally, they introduce themselves to Saitama, but when he reveals he's a hero, attempt to defeat him. Their attacks misfire and they end up getting saved by Saitama, and start contemplating about how weak their abilities are compared to the likes of Tatsumaki and Volten, who use their respective abilities to earn a living. They have a change of heart, but the group is then attacked by Dirt Earthworm and saved by Saitama again, who sends the monster flying. Genos arrives at the scene after following the evacuation warning only to find Saitama there alone with The Mediocre Ability Users, who he thinks are troubling his master. They quickly lie about how they just aspire to be heroes and wanted to spar with Saitama, who believes them and decides to train them. Dirt Earthworm observes from afar, and is about to leave the area but is eaten by a random bird. 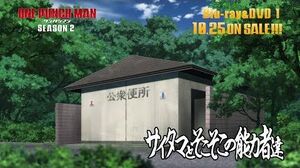