Child Emperor, Zombieman, Superalloy Darkshine, and Metal Bat are dispatched to a forlorn, snowy mountain to hunt down a monster. They fail to find anything, so they check into a lodge for the night. There they meet Saitama and Genos, who also got stuck on the mountain and had to check-in, and Flashy Flash, who is trying to relax on a vacation.

Speed-o'-Sound Sonic has also been training on the same mountain, and decides to hunt Saitama once he realizes he is there too. However, he stays outside in the blizzard for too long and freezes, losing his balance and crashing through one of the lodge windows. The heroes tie him up, but Sonic still plans to kill Saitama anyways.

Sonic easily escapes the rope and tries to attack Saitama from under the floorboards, but is stopped by Genos, and their encounter destroys the room. The dust irritates Saitama's nose, and he accidentally sneezes with enough force to blow open every door and window in the lodge. The power goes out, followed by an explosion that rocks the lodge.

The heroes grab a flashlight and head to the den, where they find the room destroyed and Zombieman unconscious. Child Emperor can't locate any other heat signatures, so he deduces that the culprit must be in the lodge. After recovering, Zombieman tells what little he knows, and Sonic enters the room to prove his innocence. The group finds that they all have good alibis, completely forgetting about Flashy Flash upstairs. They assume the monster must be responsible, but after the Hero Association tells them it is just called Crazy Brown Bear, they decide it can't be it either.

Once Child Emperor sees Saitama sneeze again, he deduces the following: the abundance of heaters in the lodge dried out the interior, Genos and Sonic's fight kicked up flammable dust, Saitama's sneeze pushed the dust into the den, all the electricity being used caused a breaker to trip, and Zombieman's lighter caused the dust to detonate. The group is relieved by the conclusion.

Suddenly, Crazy Brown Bear crashes through the front door - however, he is quickly defeated by the abundance of S-Class heroes. Upstairs, Flashy Flash continues to use all the lodge's power at once.

Characters in Order of AppearanceEdit 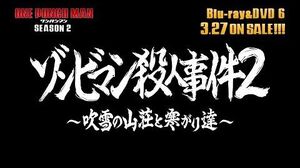 Retrieved from "https://onepunchman.fandom.com/wiki/OVA_12?oldid=181388"
Community content is available under CC-BY-SA unless otherwise noted.