Puri-Puri Prisoner and the Jailbreaking Prisoners

Puri-Puri Prisoner and the Jailbreaking Prisoners

One stormy night, a monster emerges from a junkyard and begins making its way towards Smelly Lid Prison. Noticing its approach, Puri-Puri Prisoner breaks out of his cell and quickly defeats the monster. However, he damages the prison's electricity in the process, allowing a handful of inmates to escape. Realizing that the incident may cost a certain cute employee his job, Puri-Puri Prisoner heads out to find the escaped inmates.

The inmates hide in an abandoned house in the countryside, which they begin using as a base. However, one of the inmates encounters Puri-Puri Prisoner in the city and is subdued. Speed-o'-Sound Sonic notices the commotion and confronts Puri-Puri Prisoner, with his shuriken ready for a fight, asking why he didn't try to bring him back too when he escaped during the Seafolk attack. Puri-Puri Prisoner reveals that Sonic was strong enough to escape without his help anyway, and tells Sonic he has a place back at the prison for him before leaving with the inmate. Sonic scoffs at the offer.

The inmates back at the hideout are disturbed by the disappearance of their ally, and consider turning themselves in to avoid Puri-Puri Prisoner's wrath. However, they are interrupted by the appearance of Urn Eel, a monster who was hiding in the same abandoned house before they showed up. Puri-Puri Prisoner arrives and quickly defeats the monster. He then faces the horrified inmates, but Urn Eel reveals that he is still alive and refuses to die to a pervert like him. The inmates begin to cheer on Urn Eel, but Puri-Puri Prisoner believes they are cheering for him instead. He is touched by the inmates' cheers and kills Urn Eel for good before allowing the inmates to return to prison peacefully. 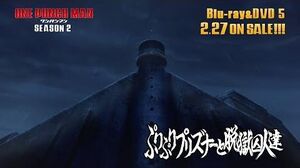