January 28, 2020
Game and Rivals (ゲームとライバル達, Gēmu to Raibaru-tachi) is the tenth OVA of the One-Punch Man anime series.

Saitama brings Genos to a tournament for the fighting video game "Wild Animals" due to the grand prize being five million yen. Several locations all over the country are being used as venues, and the battles take place online. Saitama plans to win using virtual reality controls, but his fighting technique is lacking and he quickly loses to a koala avatar in the first round.

Garou has also entered the tournament, easily defeating his opponents with his martial arts, and Suiryu does the same in another venue. Eventually Garou and Suiryu face off online, and they have a heated battle. However, the speed of Garou's attacks causes the equipment to glitch, freezing his avatar and allowing Suiryu to win.

The final match of the tournament is between Suiryu and the same koala who defeated Saitama earlier. The koala defeats Suiryu in seconds, shocking him. The koala's player goes to receive their prize, and it's revealed to be King in disguise. 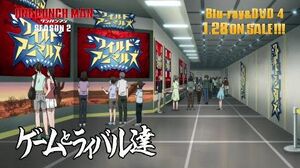