Nyan is an anthropomorphic cat-like monster with light-colored fur. He has horizontal stripes across his back and tail and three vertical stripes that cross his forehead to the back of his head. He wears a collar with a bell attached to it. 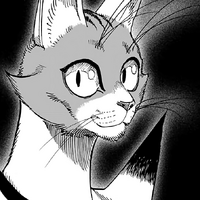 Nyan, due to being an executive member of the Monster Association and a Dragon-level monster, is very arrogant and confident in his abilities as shown in his willingness to attack Saitama even after witnessing him defeat Overgrown Rover with a single punch. In spite of that, he only seems willing to attack an opponent he feels might be stronger if he is at an advantage or using a sneak attack. Once it was clear Saitama outclassed him, he immediately fled rather than face Saitama openly showing a cowardly side. This is further emphasized by his delight in slowly tormenting the A-class heroes stationed outside, showing a bully-like mentality. He enjoys watching other monsters fulfill their lust for revenge, and eagerly allows them to do as they please. This stems from the fact that he became a monster to live the life he wants and do whatever he wants. However, when Puri-Puri Prisoner began evolving and preached concepts of love, he started to feel uneasy, being reminded of the love forced upon him by his former master. This could indicate that he has a soft spot or mental weakness against opponents who openly display love, but whether his fighting abilities are hindered against such opponents remains unclear. Nyan is not willing to risk his life for the Monster Association, as shown when he ran from Saitama after his attacks had no effect.

In the end, his arrogance and overconfidence proved to be his greatest downfall, as evidenced during his fight with Drive Knight, when he underestimated the hero's abilities and entered his body without prior planning. This gave Drive Knight the opportunity to roast Nyan and weaken him enough to impale him and finish the fight.

Even in his past life as a normal cat, he possessed extreme cruelty and sadism, as he liked to torture pests like rats until they died in agony.[4]

Nyan was initially a regular house cat whose owner often forced her unwanted love onto him via kissing and hugging.[5] The cat later became an intelligent monster capable of human speech at some point and left his owner, becoming a member of the Monster Association.

Nyan broke into Smelly Lid Prison to find Puri-Puri Prisoner, but he wasn't there. Nyan instead decided to do business with the prisoners.[6]

Nyan later transformed many prisoners into monsters using the Monster Cells and they all broke out of prison.[7]

Nyan instructs the monsterized prisoners about their roles in the upcoming battle against the Hero Association and allows them to try to get payback against Puri-Puri Prisoner. Afterwards, he takes a short nap.[8]

Nyan and the other executives of the Monster Association are summoned by Gyoro Gyoro for an as-of-yet unknown reason.[9]

Later, Nyan is seen attacking Puri-Puri Prisoner. When he senses that it will be difficult to fight him due to his loving nature and adapting during battle, he chooses to flee and let other cadres deal with him. Squeezing through small cracks in the walls, he flees as Puri-Puri Prisoner gives chase. Having decided to abandon the battle, Nyan outmaneuvers the hero, tricking Puri-Puri Prisoner into crushing his former cellmates with debris, allowing him to escape while the hero is distracted.[10]

He later witnesses Saitama defeating Overgrown Rover with a single punch and tries attacking the hero from behind with Super Feline Retribution, only to realize that his attack has no effect. Knowing that Saitama will finish him off if he stays he flees in terror, leaving a confused Saitama behind.[11]

Later, Nyan is seen walking towards a large group of heroes outside the Monster Association. Poison notices him and orders One Shotter to fire at the monster. The sniper shoots but Nyan intercepts the bullet with his immense speed and deflects it back at One Shotter, critically wounding his head. As the heroes stagger from shock at this new threat, Nyan voices his joy at finally finding a group of weak heroes. Walking to the center of the group, Nyan slashes at Needle Star, Gearsper, Jet Nice Guy and Twin Tail. Nyan announces how he is a cadre of the Monster Association, to the shock of the heroes, and monologues his past and his surprise at Waganma's escape.

Green and Strange Binding Shell restrain the monster and gives Mizuki the chance to discus throw at Nyan, only for Nyan to catch it and shatter the disc in his mouth. Poison tries to stab Nyan, but his blade is caught in Nyan's eyelid and shattered. Tired of their weak efforts, Nyan slips out of Green's vines using his super dexterity. Shadow Ring and Feather try to slash at the cadre but their blades are broken instantly before they notice they have been cut along with it. Nyan eyes a frightened Waganma as Food Battler Futoshi flees with him in his arms.[12]

Mizuki attempts to stall Nyan once more, but the creature strikes her into the air. Gearsper cushions her fall with his unleashed psychokinetic powers and prepares to fight the monster.[13] The hero uses his esper powers to destroy several nearby buildings and bury Nyan. However, the creature easily slips out of the rubble and attacks Food Battler Futoshi. He drags Futoshi and Waganma away to kill them, but his grip on them is suddenly cut off by a high-speed object. The object flies through the air and appears at the hands of Drive Knight. Nyan inquires about the identity of the hero. Instead of responding, Drive Knight goes right into battle and attacks Nyan.[14] While fast and versatile, the feline monster has trouble keeping up with Drive Knight's own speed and versatility, as he continuously changes forms to outmaneuver Nyan at every opportunity. Once he gets a chance, Nyan slips between the cracks in Drive Knight's body and begins attacking him from inside his mechanical body - however, Drive Knight quickly expels him by flooding his system with fire. The burned Nyan quickly flees from inside his body, but Drive Knight grabs him by the collar and stabs him before incinerating him again. Drive Knight then brings the brutalized body of Nyan to show Sekingar and the heroes that they have been saved.[15]

Sekingar praises Drive Knight for his victory and is in awe of his power, although the hero admits that Nyan was indeed powerful, and he only won because of the data he collected during the monster's fight with the other heroes and Nyan's arrogance and overconfidence.[16] After Genos' arrival, Genos notes that the burned Nyan is still alive in Drive Knight's grasp. Drive Knight acknowledges this fact, explaining that he intends to dissect and study him in order to improve his own technology. Nyan hears this and groans, claiming he never would've helped the Monster Association if he knew that not only are there heroes who can defeat cadres in one punch, but that he would end up being dissected too. This tips off Genos that Saitama is in the Monster Association base already.[17]

Nyan is later restrained in an iron maiden device, Checkmate, while Drive Knight leaves towards the main battlefield.[18]

As a Dragon-level Mysterious Being and an executive member of the Monster Association, Nyan is very powerful. He was shown to be strong enough to subdue the prisoners and officers at the Smelly Lid Prison with no difficulties.[19]

His strength is further supported by the fact that he was the only other Dragon-level Mysterious Being in the Monster Association besides fellow Executive Gouketsu to be tasked with recruiting new members during the initial monster raid. He attacks with his sharp claws and can easily injure S-class heroes such as Puri-Puri Prisoner. Despite his amazing abilities, he was unable to deal enough lasting damage to Drive Knight, and his overconfidence inevitably led to his defeat.

Immense Strength: As a Dragon-level threat, Nyan possesses immense strength. This was displayed when he was able to easily slash through Puri-Puri Prisoner's skin, which was stated to be so tough that even razor blades could not penetrate, using Feline Retribution.[20] Another instance of his strength is when he was able to catch and break Poison's knife with just his eyelid.[21] During his fight with Drive Knight, the strength of his Feline Retribution was also strong enough to tear apart Drive Knight's Bishop form, albeit he was inside the hero, and destroy several buildings. However, Nyan wasn't able to deal any lasting damage to the hero in his Gold form.

Supernatural Dexterity and Elasticity: Nyan can pass through cracks wider than 3 millimeters.[22] This renders restraints used against him ineffective, as he was able to stretch and deform his body to escape.[23] Nyan also used this ability to enter Drive Knight's body in an attempt to tear apart the hero from inside.[24]

Enhanced Durability: Nyan was shown to be unfazed by dozens of sharpened rocks thrown at him or being buried under such large rubble, and casually made his way through the cracks of the debris, although it could be that his supernatural dexterity allowed him to avoid injuries. He was also able to withstand some of Drive Knight's punches without significant damage.

Immense Speed and Reflexes: Nyan possesses an extreme levels of movements speed and reflexes, being able to attack Puri-Puri Prisoner, an S-Class hero, slashing through his chest before the hero could even properly react.[26] He also effortlessly deflected one of One Shotter's bullets from close range with his claw. He was able to move so quickly that a group of heroes, including A-Class ones, could not even perceive his movements as he appeared to simply walk past them.[27] Additionally, Nyan was capable of keeping up with Drive Knight, a high-ranked S-Class hero, in combat.

Gas Resistance: Nyan is able to resist the effects of gases such as anesthetic gas.[28]

Retractable Claws: Nyan can extend his claws to incredible lengths in order to slash and gash his adversaries and the environment to ribbons with great ferocity. He seemingly enlarges his claws to great lengths and sizes in order to cause widespread destruction while slipping between cracks and splits in the seams.[29]

Befitting his feline nature, Nyan attacks using his claws as his main weapon, and also moves around lithely in battle.