Needle Star (ニードルスター, Nīdorusutā) is the B-Class Rank 60 professional hero of the Hero Association. He is a former member of the Blizzard Group who was kicked out due to disciplinary issues.

Needle Star has sharp eyes, a pointed nose, and short hair with a jagged, zig-zag shaped hairline. He wears a white shirt with a black suit jacket draped over his shoulders, matching black slacks, safety-pins as earrings, and carries a spiked morning-star. His attire resembles a more casual version of the Fubuki Group's uniform.

He cares about his rankings in the Hero Association as seen when he asked Sekingar to guarantee a promotion for participation in the Monster Association raid. He has a very hot-tempered attitude, as he often got into arguments with his fellow members of the Blizzard Group, which resulted in his dismissal. He is also confident in his abilities as a hero, as seen when fighting a few low-class monsters.

Despite this, he is not completely heartless and rude, as seen when he saved Mizuki from one of Rhino Wrestler's attacks, whereas other heroes such as Tatsumaki and Sweet Mask didn't bother. Additionally, he can be cautious and warned the other heroes of Rhino Wrestler's strength before attacking any further. He also believed that all lives were equal. 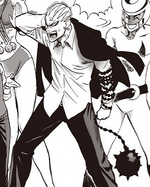 He is one of the heroes recruited to the Monster Association raid's support team. When discussing the plan of saving the hostage, he immediately asks for a guarantee that they will receive promotions, which was approved by Sekingar.[2]

When the heroes do battle with the first wave of monsters lead by Evil Eye, Needle Star swings around his spiked chain ball at a monster, crushing its head. Then, a member of the Evil Eggs monster baseball team derides Needle Star's weapon, daring him to throw it so he could bat it back to him. Needle Star is unfazed by his dare and throws the chain ball at his face, crushing it and ending his life.[3]

Needle Star then begins to adjust the trajectory of the spiked ball, allowing it to hit multiple monsters with his spiked ball. Needle Star tugs his ball back and stops it midair, slamming it into the ground. Needle Star then states that his spiked ball chain is like a part of his body, and that the monsters wouldn't be able to follow its trajectory. Other monsters reply by saying he wouldn't be able to use his special technique if they closed his distance, and that he couldn't deal with his surprise attacks.[4] Suddenly, a drilling monster jumps out of the ground, but Needle Star grabs the ball of his chain and crushes the monster's head with it. Needle Star then sprints up to the other monsters, yelling that he would turn them all into meat filling, and quickly kills them.[5]

Then, as the second wave of monsters arrives, Needle Star dares them to come so he could show him how powerful he really was. From the back of the group, Rhino Wrestler runs up to fight the heroes. Needle Star removes his cape, and rambles of how his temper got him kicked out of the Blizzard Group, and how he was waiting for an opportunity as such to show what he was capable of. Spinning his spiked ball chain, he charges up to Rhino Wrestler and uses his special move, Violence Star. However, Rhino Wrestler knocks the spiked ball away with his horn and blows away Needle Star, giving his Violence Star attack 25 points out of 100.

Suddenly, Mizuki jumps up and prepares to attack Rhino Wrestler. Needle Star de-spikes his ball to allow Mizuki to throw it at Rhino Wrestler, but Rhino Wrestler blocks the attack with his horn and throws it back at Mizuki, giving the attack 30 points. But just before the ball strikes Mizuki, Needle Star adjusts the trajectory of the ball so it goes down again, and quickly jumps up into the sky. He grabs Mizuki's hand to get her out of the way of Rhino Wrestler's attack. Mizuki thanks him, and Needle Star warns the other heroes that they should back off, stating that the monster is really strong. Taking too much damage from Rhino Wrestler's attack, he lies on the ground and watches as other heroes attack; and Atomic Samurai effortlessly eliminates the monster.

After killing a few more weak monsters, he attempts to fight Nyan, but is immediately slashed and struck down. Although, he can be seen in 2 other panels from the few following pages. Whether this is intentional or a mistake is currently unknown.

As a B-Class hero, Needle Star is fairly skilled and strong. He was able to effortlessly kill several monsters with his spiked ball and expertly change the trajectory of his ball to attack multiple monsters. Against Demon level monsters, he is rather helpless, although Rhino Wrestler gave his Violence Star attack 25 points out of 100, which was higher than the attacks of many other heroes from the support team.

Enhanced Strength: He has the strength to effortlessly throw his heavy ball with the iron chain, as well as drastically change the speed and direction it travels, which requires a lot of strength.

Enhanced Speed and Reflexes: Needle Star is able to throw his ball at high speeds, and is able to travel fast enough to hit multiple monsters before they could even react. He was quick enough to react to a drilling monster jumping up from behind and bash him in the head. He was also fast enough to save Mizuki from Rhino Wrestler's attack before it struck her.

Expert Chain Mace Specialist: Needle Star is extremely skilled with his chain mace, as he controls its projectile like an extension of his body, making his moves unpredictable.