All members of the squad wore near-matching suits of black & white armor. The female version of the armor worn by Asami and Noria was more curvaceous. The suits had an enhanced mode that accessed the total extent of the armor's abilities, enlargening dimensions and changing color to all-black, much like the suits used by Hammerhead and the Paradisers, which were also procured from the Organization. 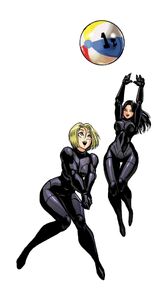 Asami and Noria playing with a beach
ball in their armor, from Volume 21
NPS under DOS control.png
Narinki's Private Squad under Do-S's control

Narinki's Private Squad was sent by Narinki to go save his son. Despite managing to exterminate two monsters, they are eventually defeated easily by the Monster Association. Their escape route was intercepted by G5, causing them to be captured by him and handed to the Monster Association. They are then brainwashed by Do-S and forced to utilize the full capabilities of their suits to battle Atomic Samurai's three disciples. Eventually, Sweet Mask interrupts the battle and, after dismissing the disciples, proceeds to massacre the entire squad before finishing off Do-S.

With the power of their battle suits, they were a rather formidable force. Their usefulness was enough for Gyoro Gyoro to demand Do-S to use her hypnotic abilities to make them into her love slaves and use the full potential of their battle suits. During the Monster Association raid, Do-S and the squad runs across Atomic Samurai's three disciples, three individuals who could qualify for S-Class, and they manage to take the swordsmen by surprise and appear to even have an advantage over them, until Sweet Mask comes along and interrupts the battle. Despite their power, they proved to be no match against Sweet Mask, who massacred the entire squad with little to no effort.

Retrieved from "https://onepunchman.fandom.com/wiki/Narinki%27s_Private_Squad?oldid=155695"
Community content is available under CC-BY-SA unless otherwise noted.