Episode 12
The Moon is one of Earth's natural satellites.

After activating his Meteoric Burst, Boros kicks Saitama to the Moon. Saitama picks himself up and after a moment's consideration jumps back to Earth, leaving an immense crater on the Moon from the force of his jump.[2]

"God" appears standing on the moon right before taking Homeless Emperor's powers and killing him.[3]

Saitama finds a small piece of rock from the moon in his boot. Discovering its high value, he goes to sell it off only to drop it in the gravel of a parking lot. Saitama and Genos then spend the night trying to find the lost moon rock. 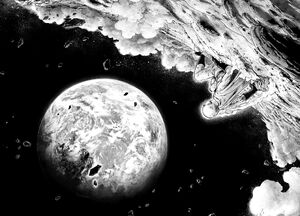 Saitama looks down at Earth from the moon.