Captain Mizuki is a tall woman with a muscular yet curvy body. Her long dark orange hair is tied in a high ponytail with a scrunchie and she has a band-aid on the left side of her face and wears earrings. She wears a tight blue spandex top with a single stripe on each side, tight blue track shorts decorated with the initials "MZK" on it, and decorates her attire by wearing three medals around her neck. 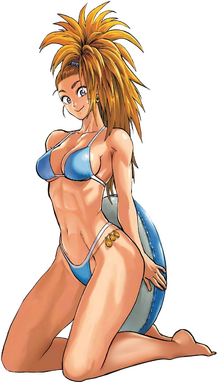 Mizuki seems to be a dutiful hero, quickly addressing the reason for the hero gathering. She also appears to have a cheerful and bubbly side, being excited about the prospect of receiving a promotion.

Despite now being a hero, she still acts as if she's still an athlete in many ways. Such examples include her referring to Sekingar as "coach" and wanting him to blow a whistle for her before she fights.

Mizuki holds a great admiration for Superalloy Darkshine, who she refers to with respect. During the battle, she takes his advice of reserving stamina to heart and wants to know what kind of training he underwent in order to get so strong. She also is a fan of King and was disappointed when she learned that she wouldn't get to experience him in action up close. In addition, she refers to Superalloy Darkshine as senpai, showing respect for the S-Class Hero.

During Nyan's ambush, she demonstrates her resolve by refusing to surrender the fight despite the clear difference in power between Nyan and herself. While acknowledging Superalloy Darkshine's incredible power and the baton that Child Emperor gave to her as motivations to keep fighting, she also exhibits a strong sense of duty, refusing to surrender the responsibility Child Emperor passed on to her. She also possesses a strong sense of teamwork.

Mizuki is a famous track and field champion who decided to become a hero.[1]

Mizuki is one of the heroes recruited to the Monster Association base raid support team.[2] She and the rest of the heroes arrived at the ghost town of Z-City where they encountered various monsters. Mizuki took on multiple enemies by herself and was successful in defeating a lot of them. However, at a point during the battle, she was outnumbered by a group of monsters, which prompted Superalloy Darkshine to help her. While Darkshine complimented her muscles, she used grappling to crush a couple of watermelon-shaped monsters. Once she finished her foes, the S-Class hero advised her to not overwork her body.

Mizuki was later shown standing next to another group of monsters she had taken care of. After that she, alongside other members of the support group, fought Rhino Wrestler but the heroes were overwhelmed by the monster's strength.

Mizuki and the other heroes of the support team fight off Monster Association forces as they escort Waganma to safety. Suddenly, Nyan appears and immobilizes several of the heroes. Mizuki attacks Nyan, using her medal as a discus, but the monster catches the medal with its teeth and shatters it.[3] Mizuki is later seen lying on the ground after seemingly being defeated by Nyan.[4] However, she gets back on her feet and pulls the monster's tail in order to keep him from reaching Waganma and Food Battler Futoshi.[5] The cadre then knocks Mizuki into the air, but Gearsper catches her and gently sets her on the ground with his released psychokinetic abilities.[6]

As a B-Class hero, Mizuki is fairly powerful. Rhino Wrestler rated her Shot Put attack 30 points out of 100 on his attack rating scale: even higher than the attacks of several A-Class heroes and double than that of One Shotter's high powered rifle shot at 15.

Enhanced Strength: Mizuki is strong enough to crush and decapitate various monsters who were either Wolf or Tiger Level. She threw a javelin hard enough to embed into concrete and is capable of jumping multiple times her height in the air. Mizuki also scored above every hero who fought Rhino Wrestler besides Iaian and Atomic Samurai, two top A and S-class heroes.

Enhanced Speed and Reflexes: Before becoming a hero, Mizuki was a world-class track and field athlete. She was able to react to and counterattack incoming monsters while looking behind her back.

Enhanced Durability: Mizuki can withstand being knocked to the ground by Rhino Wrestler, getting stomped on by a monster with sharp claws, and multiple hard falls onto concrete without any serious pain or injury. Her and Gearsper were also the only heroes from the support group able to keep fighting after Nyan's ambush.

Weapon Transformation: Mizuki seemingly has the ability to change the shape and form of other weapons. Her signature baton was shown able to transform into a pole and gain a sharpened tip. She was shown to be able to transform one of the medals around her neck into a sharp disc.

Event (種目, Shumoku): Mizuki fights in a series of events, using her equipment to support her sports-based fighting style.

Grappling: On top of her sports-themed techniques Mizuki is also a capable grappler who can wrestle opponents on the ground. However, Mizuki stated that grappling is the only other thing she knows besides track and field.

Baton: Mizuki carries a baton that she changes the shape of with "Anchor Baton" written on it. It can extend a great distance and the tip can sharpen so that it can become a javelin.[12] It was specially made for her by the Hero Association.[13]

Medal: Mizuki wears a medal around her neck. It can be detached and used as a discus.[14]