The meteor was a giant extraterrestrial rock that fell to Earth and threatened the destruction of Z-City and its surrounding areas. It was assigned a disaster level of Dragon.[1]

The meteor was a giant asteroid that glowed upon entering the Earth's atmosphere.

Astronomers detect an asteroid heading toward earth.[2] It suddenly shifts its trajectory and aims for Z-City. All S-Class heroes are called to deal with it but only Bang, Bofoi, and Genos respond. The meteor withstands Bofoi's missiles and Genos's full-powered blast with no apparent damage. Saitama then arrives and shatters the meteor with one punch. Although its momentum is halted, the meteorite fragments scatter across the Z-City and leave it with massive collateral damage. There are no fatal casualties.

The meteor was classified as a Dragon-level threat by the Hero Association, possessing powerful kinetic energy enough to not only wipe out Z-City but other surrounding towns if hit the ground. It was extremely dangerous that all of the S-Class heroes were summoned in order to stop it, although only Bang, Genos and Metal Knight were able to come in time.[3]

If it wasn't for Saitama decreasing its force and lessening the shockwave, the meteor would have blown everything away regardless of civilians were hiding in an evacuation shelter or trying to get out of Z-City.[4]

Immense Kinetic Energy: The meteor was assigned a threat level of Dragon, which Genos has remarked that it had enough power to completely destroy Z-City and even damage the neighboring cities.[5] Even after Saitama destroyed the main body, its fragments still had enough power to devastate Z-City and leave it in ruins. It was marked a 6 to 9 on the Torino scale.[2]

Immense Durability: The meteor was extremely heavy and durable, being able to easily withstand the firepower of Metal Knight's missiles. It was also unaffected by Genos's fully powered incineration blast.[2] 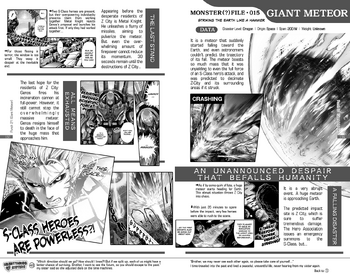