Melzargard (メルザルガルド, Meruzarugarudo) was an alien and a general of the Dark Matter Thieves. He served as a secondary antagonist during the Alien Conquerors Arc. He was killed in a fight against the S-Class heroes Metal Bat, Puri-Puri Prisoner, Atomic Samurai, and Bang.[2]

Melzargard was a large alien with pale gray skin and blood-red eyes. It had the ability to change the shape of its body to extend and reshape its limbs. Melzargard had multiple heads, each of which was able to separate and form its own body. Each head had a small marble-sized orb inside that allowed the body to regenerate around it; if broken, the head died.

Each of Melzargard's heads possessed a different personality and speech pattern.

It should be noted that as the number of heads decreased, the remaining heads became somewhat more intelligent in speech patterns. Intelligence and personality traits may have been divided amongst the heads. All of the heads appeared to have a bloodlust, and each of them sadistically taunted their opponents.

Melzargard first appears above the Sky King and the Skyfolk in A-City and swats them out of the sky.[3] Melzargard almost kills a father and son but Iaian appears and cuts him.[4] He attacks Iaian, attempting to squish his head. After taking a few slashes from Iaian,[5] he lands a blow that blows off the swordsman's left arm. He then splits his heads to continue the destruction of the city.[6]

Atomic Samurai appears alongside other S-Class heroes in an attempt to slay Melzargard.[7] Iaian states that Melzargard cannot be killed by conventional methods, but the heroes continue to fight anyway, stating that they are only used to their methods of dealing damage.[8]

Geryuganshoop contacts Melzargard shortly after, ordering him to return to the ship and take care of an intruder on board that had taken out a large sum of the equipment and workers on board. Melzargard states that he cannot at that moment and asks for support from the cannons. One of the heads attempts to fly to the ship, but Metal Bat knocks it out of the sky, smashing it apart over and over. After a few strikes, Metal Bat notices a small marble object in the head. The head tells it to let go of the marble, but Metal Bat proceeds to crush the marble, and the head begins to liquefy and dies. He tells the other heroes to aim for the marble, and they begin doing so, shifting the tide of the battle.[9]

After all but two heads have been destroyed, the cannon fire begins. However, the shells are stopped and reflected back at the ship by Tatsumaki.[10] Enraged, Melzargard attempts to attack again, but his strikes are stopped by Puri-Puri Prisoner, allowing Bang to take out one of the two remaining heads. Melzargard retaliates by hitting Bang directly,[11] sending him flying through the air, bouncing off of debris and into a concrete wall.[12]

He proclaims that humans are weak enough to be killed in one strike, then states that if he focuses on offense rather than defense, the fight will end instantly. He then states to Atomic Samurai that he will die next, and after a brief bout with the swordsman, is surprised by the presence of Bang, who approaches from behind relatively unharmed. While he's momentarily distracted, Atomic Samurai cuts Melzargard into many pieces with his Atomic Slash, and Melzargard attempts to regenerate himself head-first. However, Bang catches the marble inside Melzargard's head, stating that even a monkey would figure out Melzargard's head-first healing pattern after seeing it so many times, then destroys the marble, killing Melzargard's final head and ending the monster's life.[13]

Melzargard is a playable character in the video game, One Punch Man: A Hero Nobody Knows.

As a Dragon-level threat, Melzargard was an extremely powerful being. He was able to destroy Sky King, a monster that was around the same level as the Deep Sea King,[14] with a single strike, and the fact that he was taken out by 4 S-Class heroes, further showing his great strength. However, he himself admitted that the heroes were rather persistent.

Regeneration (再生能力, Saisei Nōryoku): Melzargard boasted borderline invulnerability due to his ability to regenerate no matter what damage is dealt to his body. The only way to effectively kill him is to destroy all five marbles in his body, which can be anywhere in the body after the regeneration but are found in the head during the regeneration.

Splitting (分裂, Bunretsu): Melzargard was composed of five bodies, each equal in strength and capable of shapeshifting. Splitting allowed him to attack from multiple areas, but staying together (合体, Gattai) as one body multiplies damage output by the number of bodies together.

Shapeshifting (変形, Henkei): Melzargard was capable of forming wings, hammers, and blades, extra limbs, and presumably more from his body; allowing him to attack from any point on his body and deal more damage when doing so.

Immense Strength: Melzargard showed the ability to cut the Sky King down in a single strike, as well as throw an attack strong enough to blow away Iaian's arm and destroy a large sum of the land behind him with the shockwave from the attack. With a single direct hit, he managed to temporarily knock away Bang, one of the strongest S-Class heroes, sending him crashing through several pieces of concrete debris.

Immense Speed: Despite his large body, Melzargard was very fast. He was able to swiftly strike Iaian, a top-ranking A-Class hero, with the hero only being able to narrowly dodge the attack that would have killed him. Although Melzargard was relatively able to keep up with S-Class heroes in speed, he was still shown to be unable to outpace the speeds of Atomic Samurai and the other S-Class heroes. 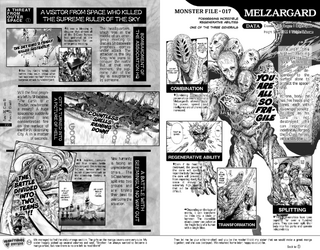