Lightning Max is a young man with blonde hair that is slicked back and tapered to a point. He has a prominent widow's peak, relatively thick eyebrows, dark lines around his eyes, and a lightning symbol on his left cheek. He wears a tight-fitting outfit that consists of a tank top, shorts, long socks and sleeves that go from mid-bicep to mid-forearm. His hero outfit is black with yellow lining, and lightning symbols emblazoned on all the pieces of his outfit.

As a martial artist, he wears karate gi, while retaining most of his hero outfit parts.

Max is shown to think ahead and spy on his target to know how to defeat them but it is shown that he has some doubt in his abilities. After his defeat at the hands of the Deep Sea King he attempts to make himself stronger.

When returning to fight against Gouketsu, Max reveals a more selfless side as he tries to buy time for Suiryu to escape, despite knowing that he and Sneck may only delay Gouketsu for a second.

Max is a playable character in the video game, One Punch Man: A Hero Nobody Knows as a DLC character.

As an A-Class hero, Lightning Max is a skilled and powerful fighter. He is also a fairly capable martial artist. He has a strong analytical ability and usually tries to not overestimate his abilities.[1]

Enhanced Endurance and Durability: Lightning Max was able to continue fighting the Deep Sea King, even after getting punched by the monster and sent flying into a building. He also survived a kick from the transformed Gouketsu, a Dragon-level Mysterious Being, albeit the monster noted that he "barely touched" Max,[2] that sent him flying out of the Super Fight stadium along with Sneck and recovered in time to save Suiryu from The Three Crows.

Enhanced Strength: Being an A-Class hero, Max possesses a great deal of physical prowess, and was able to defeat one of the Three Crows, who individually were Tiger-level threats, in a single kick which caused its body to explode on impact.

Enhanced Speed: As an A-Class hero, Lightning Max has impressive speed, which is further augmented by his lightning shoes.

Martial Artist: Being revealed to be a martial artist, Lightning Max has been shown to be a skilled hand-to-hand combatant. Max's martial skills were strong enough that he's able to compete in and advance through the Super Fight tournament though he was no match for Suiryu.

Hyper Karate (ハイパー空手, Haipā Karate): Lightning Max's preferred method of fighting. This fighting style seems to revolve around karate kicks centered at different directions and intervals. He uses multiple inbuilt mechanisms in his shoes that act to amplify the power of his kicks and create electrical discharges while acting as a hero.[1]

Lightning Shoes (稲妻シューズ, Inazuma Shūzu):[5] Lightning Max wears a pair of special shoes with gunpowder stored inside them. The shoes also have multiple inbuilt mechanisms such as boosters inside them. The detonation switch is in the heel and an iron plate is built into the sole. These shoes have been his favorites since before joining the Hero Association.[1]

Telescope: Lightning Max carries a telescope with him to observe events from afar. 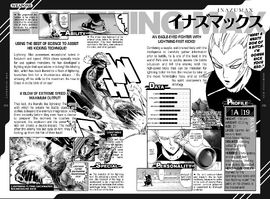