Marshall Gorilla is a buff gorilla with a scar on his left eye who wears a white beret with a banana pin affixed to it. He wears his holster over his black t-shirt and has many bananas attached to it. The bananas on his t-shirt are actually containers for his cigars; in the anime, this was changed where they are actual bananas. He also wears camouflage pants with black knee pads and black combat boots. 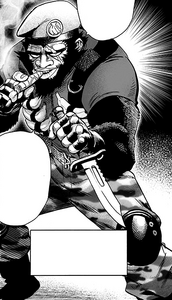 Marshall Gorilla is confident in his abilities, but still seems rather grounded in what his capabilities are.[1] He is also very arrogant to the point that he demands the Hero Association to raise his threat level from Tiger to Demon or else he will keep attacking A-class heroes. He also despises monsters who take on a human lifestyle, especially if they are ape monsters.

In W-City, Heavy Kong has been struggling against Marshall Gorilla for 15 minutes.[2] Marshall Gorilla eventually defeats Heavy Kong without receiving any injuries.[3] Later, he is shown to demand the Hero Association to raise his threat level from Tiger to Demon or else he will keep attacking A-Class heroes in the street.

While being trailed by S-Class Hero Zombieman, he encounters Armored Gorilla. Thinking he was a pro hero, Marshall shouts in order to get Armored Gorilla's attention, only to be surprised to see that the latter was a gorilla too. After hearing that Armored Gorilla has apparently sided with humans, Marshall Gorilla attacks him with Banana Slash, which Armored Gorilla immediately counters with a punch to the face, knocking Marshall out cold.[4]

As a Tiger level threat, Marshall Gorilla is a threat for the lives of a great number of people. He was able to defeat Heavy Kong, an A-Class hero, decisively. Despite this, he is no match for Armored Gorilla, who beat him in one punch. This would suggest that he is stronger than the average Tiger-level threat, but still not strong enough to be classified as a Demon-level threat.

Combat Knife: Marshall Gorilla wields a knife during battles and is presumed skilled in wielding it. The knife was shattered upon his attempt to kill Armored Gorilla.