Maiko Plasma's appearance was that of a Maiko; with her black hair tied up in a traditional Japanese way with many decorative hair clips with stars, clouds and thunderbolts. As a Maiko, she wore a long kimono called a hikizuri, with clouds and thunderbolts printed on it, a black obi sash with two belts tied over it and wedge-heeled wooden sandals. Around her, she had eight Tomoe drums attached to her back and carried two drum sticks in her hand.

When in her High Voltage Mode, her clothing becomes more modern. She wears punk boots and her kimono is considerably shorter. Her drums are no longer attached to her, but are simply free floating.[1] 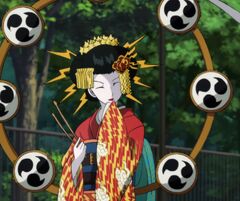 Maiko Plasma seemed rather calm and acknowledged that there are more powerful beings than her in the world, a trait very few low threat level monsters have.[2]

Maiko Plasma is the implied wife of Electric Catfish Man and they share a mutual respect for each other.[3]

In the Monster Association, she and Electric Catfish Man are discussing their victory over Lightning Genji and remarking that it was thanks to Gyoro Gyoro and his carefully-planned choice of who they would fight that the pair won against the A-Class hero.[6]

Later, Maiko Plasma, alongside other Tiger-level monsters including Electric Catfish Man, are attacking Puri-Puri Prisoner. When their attacks have no effect, they attempt to flee only to run into Baquma, a Demon-level monster resembling an elephant. Baquma tells them not to retreat, to which the monsters angrily ask him to fight the S-Class hero in their place. Baquma agrees and subsequently consumes them all to gain their powers. During the consumption, her partner, Electric Catfish Man, manages to escape on his own and tries to save her from being sucked in Baquma, however he fails. Shortly afterwards, she and the other monsters who were absorbed by Baquma are freed when Puri-Puri Prisoner defeats the elephant-like monster. As she is released from Baquma, Electric Catfish Man catches her and leaves the scene. While they are leaving, Maiko Plasma wonders to him if they would be punished for fleeing, which her partner responds that it does not matter anymore and something like a real big earthquake is coming.

As a Tiger level-threat, Maiko Plasma was a threat to the lives of a great number of people. Despite her disaster level, she was able to defeat Lightning Genji with the help of Electric Catfish Man, albeit with both of them having a type advantage over the hero.

Electricity Manipulation: As an electricity-based Mysterious Being, Maiko Plasma has the ability to generate several bolts of electricity. Her electricity is potent enough to damage the equipment used by Lightning Genji, and was generally pink in color.

Electricity Resistance: Maiko Plasma was unfazed by any of the attacks from Lightning Genji's electric stun batons.

Supportive Combatant: Maiko Plasma mostly takes on a supporting role in combat, sitting in the back and controlling combat area with her lightning bolts. She relies on Electric Catfish Man to do most of the damage.

Tomoe Drums: Maiko Plasma possesses eight Tomoe drums that shot a bolt of lightning when she hit them with her drum sticks.[8]