One-Punch Man Wiki
Register
Don't have an account?
Sign In
Advertisement
in: Articles in need of citations, Characters, Humans,
and 5 more
English

Lin Lin is a young and small girl with a lean build and slender figure. She has dark hair braided and tied into loops with bangs that cover her forehead. She wears a maroon qipao style top with white arm warmers and a scarf. She accessorizes with bells on her hair, ears, and shoes. She has gray eyes (red in the anime). 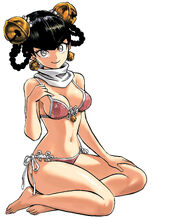 Lin Lin is very eager, wanting her match to begin.[1] She is also inquisitive, wanting to know more about Charanko (which was Saitama in disguise) and about Suiryu's abilities.[citation needed] Lin Lin later develops a fear of monsters, shivering at the thought of them.[2]

Lin Lin participates in the Super Fight Tournament at the the C-City Super Stadium. This is the second time Lin Lin has participated in the tournament.[3] Her first battle is against Max[4], who quickly knocks her out. She is then taken away on a stretcher.[5]

After witnessing Saitama's (disguised as Charanko) compelling victory against Choze, Lin Lin audibly ponders why no one has ever heard of Charanko's unbelievable strength.[6] During the match between Saitama and Suiryu, Lin Lin is present with Sour Face, Mentai, Zakos and watches they fight. She is later present at the closing ceremony, which is suddenly interrupted by The Three Crows and Gouketsu, who tells them they will become monsters.[7]

Lin Lin and the other martial artists are given a choice to become monsters or die. Visibly frightened, she is shocked to see some of the fighters accept the offer.[8] She later watches Suiryu fight the transformed martial artists and is saved by him from Choze's energy ball attack.[9] When Suiryu considers becoming a monster, Lin Lin watches, frightened. She is relieved when it is shown that it was never his intention and cheers for Suiryu.[10] Lin Lin is then knocked out by the crows along with the rest of the martial artists.[11]

Lin Lin is later seen recovering in a hospital with Sour Face and Zakos, as they watch the news about the Monster Association.[12] She, along with the other martial artists want to go aid the heroes, but Suiryu suggests they leave it to the pros instead.[13]

Not much is known about Lin Lin's strength. She is rumored to stand at the top of female martial artists.[14] Additionally, she is shown to possess a large number of weapons which she is presumably proficient in using.[15] However, she was beaten by Max without any trouble.[16] She was also no match for a Demon-level threat like The Three Crows.

Enhanced Speed: Her movements are described to be lightning fast, and like a work of art.[17]

Proficient Martial Artist: Rumored to stand at the top of female martial artists, Lin Lin should have enough skill for such rumors to be based on.