Lily is the B-Class Rank 74 professional hero of the Hero Association. She is a member of the Blizzard Group.

Lily is a young girl with fair skin and bluish-purple eyes. Her most noticeable trait in her appearance is her long, black hair, which is always seen in a high-ponytail with bangs covering the right side of her face, a single light blue highlight and a white lily flower on the top of her head. She wears a standard business suit like most members of the Blizzard Group. Lily's early appearance had no highlights and a ribbon instead of a flower she wears currently. 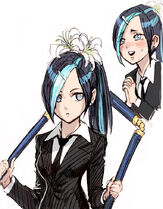 She idolizes Fubuki and is very loyal to her. Lily also would do anything for her leader, even work part time jobs overnight to raise money so the Blizzard Group can get their own car. Otherwise, she's portrayed as a girl who takes her job as a hero seriously.

Lily was present, when Eyelashes was giving the report about the investigation in Z-City's ghost town and the destruction wrought by the fight with Kombu Infinity.[3]

Upon hearing news of the destructive battle between the Hero Association and the Monster Association in Z-City, Lily and the rest of the Blizzard Group leave the hospital to go help Fubuki. Lily tries to contact Fubuki, but she doesn't respond.[7]

She is shown in the background while fighting along with the other members of the Blizzard Group.[8]

Struggle of the Blizzard Group[]

The Blizzard Group is in need of a new car. Fubuki notes that there are plenty of flyers nearby and if they, the Blizzard Group, work together they should be able to earn 5 million, enough to buy a new car. The Blizzard Group begins on their part time jobs for a week, Lily decides to work at the supermarket. They work tirelessly, Lily even worked during the night, but together they only managed to earn 3.5 million. Like the others, she is shocked when Fubuki said she meant to go after criminals' bounties for the money. [9]

When the Blizzard Group were explaining the factions in the Hero Association, Lily asks Fubuki why she wants Saitama in the group. When Fubuki challenges Saitama to a competition and to bring his participant, Lily was stunned to see Bang, King and Genos competing. Like the rest of the Blizzard Group, she was defeated by King.[10]

The Sisters Who Have Too Many Things Happening[]

During the Deep Sea King's invasion on land, Lily and the Blizzard Group cornered a Seafolk. Lily is the first to attack, but the monster used Acid Spit, but was saved by Fubuki. The next day, the group was disheartened when they learned that their heroism wasn't in the newspaper. After Fubuki left, Eyelashes explains to Lily about the relation between Fubuki and her sister Tatsumaki.[11]

As a B-Class hero and one of Fubuki's most trusted subordinates, it can be assumed that Lily is a fairly skilled combatant, though given her ranking it's implied she isn't too strong by B-Class standards.

Weapon Expert: Lily appears to be skilled in wielding her weapon of choice, the three-section staff.

Psychic Combatant: It is unknown if she truly possesses psychic powers, however, it is stated that Fubuki taught her and the rest of the Blizzard Group one psychic technique: