One-Punch Man Wiki
Register
Don't have an account?
Sign In
Advertisement
in: Articles in need of citations, Characters, Male,
and 6 more
English

Kamikaze (カミカゼ, Kamikaze),[4] better known by his hero alias Atomic Samurai (アトミック侍, Atomikku Zamurai), is the S-Class Rank 4 professional hero of the Hero Association and is recognized as one of its most powerful heroes. He is a swordmaster and a member of the Council of Swordmasters.

Atomic Samurai has long black hair tied in a ponytail. He has dark eyes and a defined jawline. He sports a small goatee and is usually seen chewing on a blade of grass. His attire consists of a hooded red cloak with an atom symbol on the back draped over his open black haori. Beneath the haori is a traditional loose-fitting white robe tied with a white sash and two haori himos. He wears his swords on his left side. 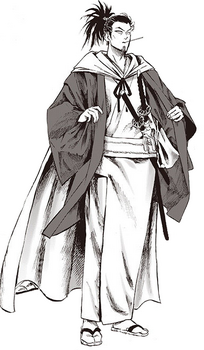 Atomic Samurai has a rather prideful and jocular personality, as seen when he refused to shake Saitama's hand, telling him that he only acknowledges the strong, and telling Saitama that he would greet him properly only if he makes it to the higher ranks of S-Class. He also appears to be quite sensitive about being called middle-aged. Kamikaze looks out for his disciples and pushes them to do their best, as seen when his disciple, Iaian, lost his arm, he refused to let his swordsmanship end. However, what he hates the most is being disregarded as a weakling, as he almost loses his composure when Sweet Mask declared Kamikaze weaker than him.

At the same time, he only seems to tolerate people calling his disciples weak, but with great discomfort. Despite his prideful nature, he behaves humbly to those he respects. This is seen with Bang, a fellow hero whom he holds the utmost respect for, and also his fellow Master Swordsmen.

Atomic Samurai also enjoys his swordplay and makes a game out of it, often taunting monsters and showing off as he cuts them to pieces. Specifically, in the raid on the Monster Association, he ignores Rhino Wrestler after cutting him and subsequently killing a monster with the blade of grass in his mouth.

Kamikaze also is straightforward to a humorous degree in many ways, and is incredibly confident and cocky. Atomic Samurai's advice is always to "do it more". This aspect of his personality is most prominently seen when giving advice or improving himself, telling Iaian who had just lost his arm to simply stop bleeding in the fight against the Dark Matter Thieves, explaining to his disciples that to beat people stronger than themselves they simply need to get stronger and faster. Despite this seeming nonsensical, it is inspirational to Atomic Samurai's disciples.

His confidence has proved to have been his greatest downfall on a few occasions though. One primary example was in his encounter with Black Sperm, a Dragon-level threat with the ability to multiply. Confident he could defeat the monster, he slashed the copies in half multiple times, even though they were replicating into thousands, which ultimately led to his own defeat. He also was very brazen while fighting Melzargard, refusing to find another way to kill him besides melee combat and brute force.

He is also eager to test his strength against strong opponents. As a result, he thought to challenge another hero to battle and test their spirit. He chose King, who was known as "the strongest man on earth". The challenge was proposed out of curiosity about King's fighting style as well since it was largely unknown to him. He remains calm even against the most persistent of enemies.[2]

He has a way of judging a person by having them cut an apple. This was how he chose his three disciples. He later used this method of judgment on King and mistook King's inability to draw his sword (and therefore inability to cut the apple) as him cutting the apple so fast and perfectly that it went back to its original state.

Rather than simply discourage or impress Atomic Samurai, the events motivate him to restart his training, showing an underlying passion for his craft, and a respect for those stronger than him.

Atomic Samurai is one of the top S-Class heroes. He is regarded as one of the most powerful of them, and the strongest backup hero in the Hero Association.[citation needed][5] He is also considered Earth's strongest swordsman.[2] According to Darkshine, if Garou, even in his half-monster state, were to fight Atomic Samurai, the Hero Hunter would most likely die before being able to show any of his techniques.[6] While wielding the Sun Blade, albeit for a very limited time, Atomic Samurai is powerful enough to slice off one of Homeless Emperor's largest energy spheres to pieces and even cut Golden Sperm's arm off, overpowering two of the strongest members of the Monster Association.[7]

He has the ability to perceive a person's life by asking them to cut an apple, which is the method he used to recruit his three disciples.

Immense Speed and Reflexes: Atomic Samurai possesses incredible levels of speed and reflexes, being able to cut his opponents to pieces in the blink of an eye without them even managing to react. He was capable of countering many of Melzargard's attacks, which were extremely quick in their own right.[8] His amazing speed was shown again when he defeated a transformed Haragiri, who claimed to be faster than the speed of sound whilst a human. Atomic Samurai slashed him dozens of times so quickly that Haragiri appeared to have not moved at all.[9] His sword drawing speed is so fast that even Sonic could not see its execution.[10] He was capable of slicing Rhino Wrestler, a Demon-level monster, into pieces so fast that the monster assumed he had not attacked at all, shortly before dying.[11] Additionally, Atomic Samurai has further showcased his tremendous speed in his fight against Black Sperm, a Dragon-level threat, where he was able to slash a large number of clones of the monster into dozens of pieces, in extreme rapid succession.[12]

Immense Strength: Atomic Samurai appears to have an extreme deal of strength, as he is able to easily cut through solid matter with his sword, as well as create a powerful shock wave with a single slash. His strength is said to be "nuclear-powered."[2] Additionally, he was able to slice a monster into several pieces using only his toothpick.[13] During his fight with G5, he was strong enough to cut apart the tough machine but not its extremely durable core, which he did not anticipate.[14]

Enhanced Durability: Atomic Samurai is quite resilient. He was able to survive an onslaught from Black Sperm, a Dragon-level Mysterious Being.[12] Even after being put in a weakened state, he was still strong enough to destroy the roof of the hallway and bring it down on the Black Sperm copies.[12]

Enhanced Stamina: Atomic Samurai has high stamina and endurance, as demonstrated during his battle against Black Sperm, a powerful Dragon-level Mysterious Being. Despite being severely beaten down by the monster, he managed to remain conscious long enough until Tatsumaki interrupted the battle and shielded him with a psychic barrier.[15] Later, after resurfacing with the other heroes, Atomic Samurai was able to continue to fight the remaining high-ranked monsters of the Monster Association, even though he had just been beaten down by Black Sperm earlier.[16]

Master Swordsman: Atomic Samurai is an extremely formidable swordsman, so much so that he is considered to be the Earth's strongest swordsman. Legend even says that he can cut down over 100 enemies with each strike.[2] His sword attacks are so fast and strong that the enemies are slashed into many pieces in an instant without even being able to react. He was also able to cut a monster to bits using a mere toothpick.[13] Additionally, Atomic Samurai was able to partially cut off Black Sperm's body without causing the monster to duplicate using the blunted edge of his sword, while also pummeling him to death. [17].

However, his swordsmanship does have a limit, since he cannot slice through the gap between cells, and he can only prevent his sword from cutting blood vessels or organs, not atoms.[citation needed]

Master Teacher: Atomic Samurai is shown to be very skilled at instructing and raising disciples in the art of the sword. This is demonstrated by his three disciples, who are all at the top of the A-Class rank of the Hero Association, right underneath Sweet Mask himself. According to Fubuki, all of Kamikaze's disciples would have already been in S-Class, if it weren't for Sweet Mask's gate-keeping.[2]

Stick: Atomic can use the stick he normally chews on as a weapon.[13] 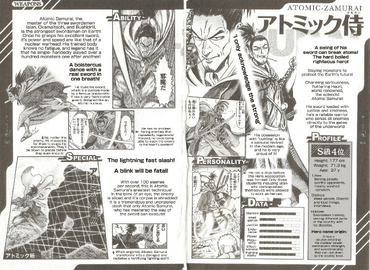