Jet Nice Guy is a cyborg. He wears sunglasses, round shoulder and knee pads and has the letter 'J' printed on the right pectoral of his shirt. He also wears boxing gloves. He later upgraded his appearance and armor, sporting longer hair and an upgraded body.

When J-City was attacked by the Seafolk, Jet Nice Guy hid inside the evacuation shelter. However, when the Deep Sea King attacked said shelter, he was one of the first heroes who stepped up to try to defend the civilians there. Such behavior indicates that despite being frightened, he was willing to risk his life to protect the people in the shelter. He also respects his superiors, stating that he was glad to have an A-Class hero help him fight the Sea King.

Jet Nice Guy won the lottery and he used his winnings to pay someone to turn him into a cyborg. He joined the Hero Association sometime afterwards.[1]

When J-City is invaded by the Seafolk, Jet Nice Guy hides inside the evacuation shelter along with other citizens. But when the Deep Sea King attacks the shelter, he, along with All Back-Man, Bunbun Man and Sneck, tries to defend the normal civilians.[2] However, they are all easily defeated.[3] 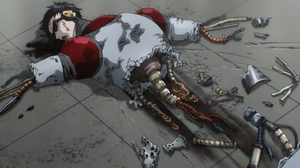 As a mid ranked B-Class hero, it can be assumed that Jet Nice Guy is a fairly skilled combatant, but as expected, he can't do anything against monsters of threat level Demon. Judging by his appearance and his performance against the Sea King, it can be assumed his cybernetic components are a good deal less advanced than Genos'.

Enhanced Strength: As a cyborg, Jet Nice Guy possesses strength above average human capabilities. He was able to kill some monsters just by simply punching them during the initial attack against the Monster Association after he was upgraded.

Cybernetic Combatant: Jet Nice Guy relies on his cybernetics to fight against monsters by delivering strong attacks thanks to his enhancements as a cyborg.